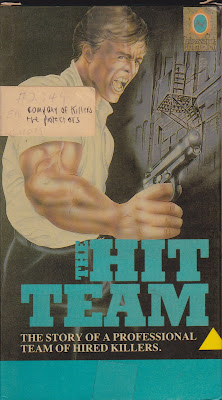 In Denver, Colorado, George DeSalles (Milland) is a hot shot businessman at the top of his profession. He contacts a group of men (the said “hit team”) with the intention of killing his wife. This begins to unravel the dominance of the hit team in Denver. The main triggerman is an unstable maniac named Dave Poohler (Saxon). He’s frantically going around town trying to hide from the cops, as well as his fellow partners-in-crime. Everyone seems to want to get their hands on this Poohler guy. What will be his fate - and the people searching for him?

It appears The Hit Team, or, Company of Killers as it is also known, was originally intended as a TV movie back in 1971, but then got a theatrical release. Flash forward to the 80’s, when video stores were hungry for product to fill their shelves. They would take just about anything, regardless of its quality.

The Hit Team was probably inexpensive to acquire, and it was simply gussied up with some nifty artwork. It seems The Hit Team is a classic case of being suckered in by the box art. If you look at that yelling guy with the gun, you figure you can’t go wrong.  Unfortunately, this is a boring, staid, old-fashioned programmer where nothing happens of any excitement.

Despite the cast of quality names, this is a dry, dull procedural that doesn’t even come close to rising above the pack in any way. It’s very slow, especially by today’s standards. It’s just a bunch of dry, unengaging scenes piled on top of each other. It seems the filmmakers didn’t make much effort to really involve the viewer.

It’s sad, really, because with this cast, the movie had potential. Even though The Hit Team is deservedly obscure, John Saxon does put in a very good performance and manages to stand out. But it’s not nearly enough to save the whole movie. People like Ray Milland only add to the sense of stodginess. Saxon can’t hope to overcome that. 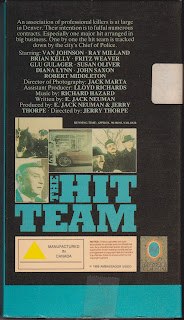 Because it was 1971, there are some great mustaches and big hair on display, and the movie even starts out like Police Squad! (or The Naked Gun series) with a camera mounted on top of a police car as it drives around.

The way we viewed the movie was the Canadian VHS, released on Ambassador Video. There are some notable errors on the box (besides the fact that they make the movie out to be something that it’s not) - they list the running time as 90 minutes, but it’s really 72. According to the description, “Their intention is to fulful numerous contracts”. I know I had a sense of fulfulment. Also, someone named “Glu” Gulager is involved. We realize “Clu” isn’t the most common name, but Glu? Come on. Maybe the box was written by a French Canadian that had never tried his hand at English before.

In all, we feel The Hit Team will more than likely bore you to tears. Really the only reason to ever buy this VHS is for lovers of box art that want this cover in their collection. Otherwise, unless you want a cure for insomnia, we say avoid.

Definitely one of Saxon's worst films.

BTW, when are the reviews for Trained To Kill and Fire With Fire coming?

Trained To Kill isn't going to be posted for awhile unfortunately...probably Janurary...we have a bunch of themes for the rest of the year: Van Damme month in October, Chuck-Vember in November and Godfrey Ho-Ho-Ho for December.