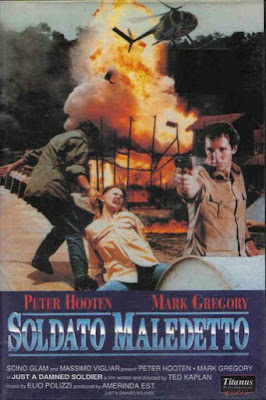 In Cambodia, a four-man strike force led by Bolan (Hooten), stages a raid on an industrial complex. After shooting a lot of people and blowing a lot of stuff up (a trend that will continue throughout the proceedings), the men - which also includes Mark Gregory of the Thunder and Bronx series - steal a large cache of gold. The man whose compound was raided, top dog arch-baddie Mr. Titelman, wants revenge on the strike force.

Based on who is sending and receiving the gold, Titelman states he doesn’t “want to see the tense political situation in this country explode”. Truly that’s not the only thing that’s going to explode. Titelman is tied in with the Cambodian authorities and will be in deep trouble if he doesn’t find his men. Thankfully, he has loads of cannon fodder to disperse throughout the jungles of Cambodia (i.e, the Philippines. Let’s not forget Mike Monty is involved as a suit named Schaffler). Who will survive...and who will get the gold?

Oh, Hooten, we hardly knew ye. Truly Peter Hooten could have been the next Steve Guttenberg. (Peter Hootenberg?) At least they have a similar look about them.  Hooten and the aforementioned Gregory lead us through yet another Italian-produced jungle romp, where the machine guns fire with abandon, and huts were made to be blown up. If you like that sort of thing - and we’re supposing you do - Just a Damned Soldier (great title - even better than Titelman) will win you over. It’s a quality example of this sort of movie, and there were plenty of them in the late 80’s. It’s no Commander, but what could be? JADS does what it does quite well, and praise goes to writer/director Ferdinando Baldi, using his normal anglicized name of Ted Kaplan. 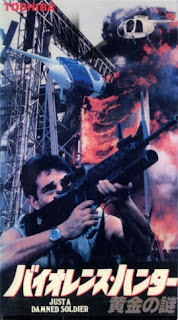 Baldi ended his lengthy career, which dates back to the 1950’s, by making some jungle-set blow-em-ups, and what better way to cap off a life in cinema? His final three movies are Warbus (1986), Ten Zan - Ultimate Mission (1988), where he infamously sent Frank Zagarino to North Korea - and the movie we’re currently discussing.  Baldi re-teamed with his Ten Zan composer, Elio Polizzi, whose great music goes a long way in helping things stay afloat. The music also helps to give the whole movie a “Contra” vibe - soldiers in the greenery, shooting, 1988.

Because plot is minimal (not a complaint; they had to make time for more exploding huts), things do slow down at times, but JADS is still solid and has a lot going for it. They sure don’t skimp on the blow-ups and shooting. Also Titelman is a Taekwondo arms dealer. Featuring the songs “The Shadow of Your Eyes” by Gatsby and the truly memorable “I Just Have Had Enough” by Paula, Just a Damned Soldier is a Damned good time. 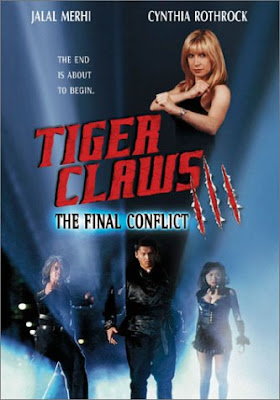 
Tarek (Merhi) and Linda (Rothrock) return as “New York City”* cops in this third and, thankfully, last installment of the Tiger Claws franchise. And what a franchise it was. This time around, an evil baddie named Stryker (Avedon) comes on the scene. While we have seen many guys over the years with the name Stryker, this time he mentions that his name is “Stryker Godunov”. Okay. So, Stryker Godunov for some unknown reason unleashes three unkillable Martial Arts masters onto the streets of  Toronto...sorry, NEW YORK, and all sorts of havoc ensues. Because Tarek is a bit slow in the head, it takes him a while to find the answer that will stop all the madness. Obviously, the answer is Carter Wong, just like in real life. Carter, as Master Jin, takes Tarek to the icy wastes of...New York...to train hard, Rocky IV style, to fight the bad guys that are Superman 2 style. With Stryker controlling the baddies, is anybody safe? Will Tarek rise to the occasion? Or will something truly stupid happen to screw it all up?

Yes, as you may have noticed, there is a Tiger Claws THREE. Just why, exactly, is anybody’s guess. We had a hard time sitting through TC3 (and if Billy Blanks is to be believed - and he usually is - there are only 1,997 sequels to go) for numerous reasons. Sure, it has some of the standard low-budget movie pitfalls we are more than used to and totally okay with: bad lighting, junky-looking cinematography, and acting so stilted it should be used by Uncle Sam in a Labor Day parade. The real crime here, if you can overlook the surface problems, is the minimal appearance by fan favorite Cynthia Rothrock, in favor of Jalal Merhi and the ever-unlikable Loren Avedon. Though, to be fair, he is well-cast as a pompous jerk bad guy. 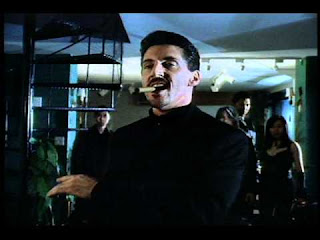 Why director Maunder thought axing the delightful Rothrock just so Merhi can clog up our screens like a hairball in a shower drain remains unknown, but maybe it wasn’t up to him. Maybe Rothrock, wisely, said no more. Speaking of hair, and to be fair to “Tarek”, Merhi’s hair does look less painted-on than usual. But the lack of Rothrock isn’t even the worst of Maunder’s sins. Without giving anything away, there is a mind-numbingly stupid plot twist that, as a viewer, will likely make you feel angry and insulted. Again: why? And no amount of recycled Bolo Yeung scenes and “33% new footage!” flashback moments can paper over it.

So while Stryker’s need to take three 500-year-old outfits in a museum display and make them come alive and do wire-fu is not explained, neither are the methods used to combat it. Tarek prepares to combat the supernatural evil by attempting to snatch a piece of sushi hanging from a string by sticking his hand through a Price is Right-style moving wheel. That oughta show’em. Thankfully, however, the great Carter Wong is here to help us all, and his classic Hardcase and Fist-style delivery is still in full force. For example, when he says the word “Stryker”, his super-thick accent makes it sounds like he’s saying “Fraggle”. Which leads to quotes such as “Fraggle is against me”.  Perhaps a Doozer would be more intimidating than Loren Avedon.

There’s the time-honored warehouse fight, a lot of yelling and grunting (mainly because the three baddies never say anything), and even a T.I.G.-style farmhouse fight. Even at the final fight, the jumping/alternating hitting the sides of the feet thing looks less like a battle to the death and more like the Kid n’ Play dance. At one point, someone even says “they are fighting spirit” - perhaps a reference to the 1992 Loren Avedon movie of the same name? But, in the end, Tiger Claws III feels like a loser of a movie, if not a complete waste of time...and that thing we mentioned earlier is the straw that breaks the Tiger’s back.