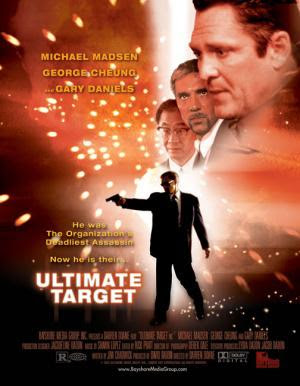 
Thomas Kane (or is it Cane?) (Daniels) is a hitman. He works on sort of a “board of directors” of other hitmen and hitwomen. These hitpeople are overseen by their boss, a guy named Raymond (Cheung). It’s Raymond’s job to keep people like Uncle (Madsen) and Johnny (Fralick), among others, in line.

Kane gets out of line when he begins double-dealing: he takes money from his intended victims as payment for sparing their lives. When the organization finds out about this, they get mad and send all their employees after Kane, thus making him the ULTIMATE TARGET. The only problem is, his wife Jody (Denier) and his daughter didn’t know about his profession and now they’re on the run from the baddies. Holing up in yet another dusty ol’ town, Kane prepares to take on the dangerous people he once worked with. But will he be successful?

We hate to be the bearer of bad news. I mean, we really, really do. It pains us to report that, after fifteen years of waiting to see this quasi-unreleased movie, we found that it was a disappointment. We understand that it was plagued with production problems and was swept under the rug, along with a lot of DTV product of that time (and a decent chunk of Michael Madsen’s career), becoming another casualty of the low-budget DTV downturn of the late 90’s/early 2000’s.  It was around this time that the DTV bubble went bust, and items like Ultimate Target make it easy to see why. Not only is it a Tarantino Slog (a term we coined), but, at this point in time, it’s safe to say that it’s also a Guy Ritchie slog. Let’s just say it hasn’t withstood the test of time.

We were truly excited to see one of our favorite actors, Gary Daniels, team up with Michael Madsen. Even the (unnecessary?) narration from Daniels’s character is helped along by his mellifluous voice. This is countered by Madsen’s gravelly voice, which is ALMOST enough to keep the movie afloat, but the only problem is that we hear way too much of their voices.

In true Tarantino Slog style, this movie is extremely talky. We needed less talk, more rock. Characters gratuitously eat/talk about breakfast cereal, reminding you instantly of Eric Stoltz’s character in Pulp Fiction. There’s a ton of other yak-yak, and when we finally get to see some fight scenes, they are pulled and stretched in varying combos of slow motion and fast motion. As we have stated before, we really hate fast motion. Another thing we hate, bathroom humor, is also, sadly, here. Maybe the characters talked about everything else there is to talk about and finally reached the bathroom. Not good. Another strike. 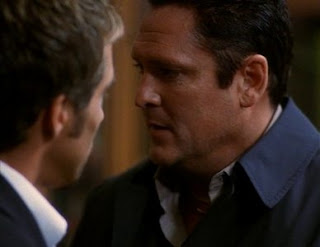 On the bright side, Daniels is good in the movie and tries against all odds to make everything work. Even when what surrounds him is weak, Daniels always remains watchable. The pairing with Madsen didn’t live up to its full potential, but Daniels was reunited with his old Deadly Target (1994)/Fistof the North Star (1995)/White Tiger (1996) co-star George Cheung. We have always admired Cheung and his impressive resume. But this whole outing doesn’t FEEL right. Almost like it wasn’t fully completed, which perhaps it wasn’t.  It’s all very similar to the comparable Double Tap (1997). In that particular T-Slog, Stephen Rea is the hitman, and the rest of the cast jabberjaws on about a bunch of needless topics. Please consult that review for a more in-depth analysis of the aforementioned Tarantino Slog.

In the end, Ultimate Target (AKA Ides of March, not to be confused with the Ryan Gosling movie of the same name, though it would have been cool to see Gary Daniels in Gosling’s role) proves definitively that characters walking in slow motion either with or without sunglasses is not enough to make a complete film. 2000 was just about he moment when the shorthand replaced the substance. Much like Hostile Intent’s beloved Pastebucket McWoo, the last thing we as viewers see, if you stick it out all the way to the END of the end credits, is this, and we quote: “2001 Giants Entertinment”. Yes, that’s right. They misspelled “Entertainment”. And doesn’t that say it all, really? 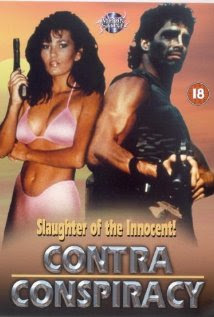 
“You live and you die and you make your mark” - Hillary

When film director Duncan Savage (Michael Williams, in his only credited role to date) takes his crew out to the California desert to shoot a low-budget movie, everything seems to be going according to plan. He even takes his daughter Kiersty (Vicki Stephenson, also her only role) along so she can see for herself the behind-the-scenes magic of moviemaking. Sure, there are the normal hiccups along the way, but nothing any of the experienced crew can’t handle.

That is, until they run afoul of some baddies. Maybe the location scout should have known, but it seems the film crew has set up shop way too near the base of a gaggle of paramilitary nutjobs. When the two cross paths, a massacre ensues. Kiersty survives, and ends up being debriefed by a trio of government suits. As Kiersty recounts the tale of how she and a few other crew members survived in the nearby forest, we see how it all played out. This includes how they fended off a psycho named Hillary (Bahner, not the one you think). But what, exactly, is the CONTRA CONSPIRACY?

Contra Conspiracy (no “the”), is another pre-PM Pepin and Merhi production under their City Lights banner. All the names we’re so used to seeing in the credits are present and accounted for, from Charles Kanganis, the writer, to Addison Randall, a producer, to John Gonzalez, who did music, to name just a few.

Anyone familiar with City Lights or PM will recognize not just these names, but also the style of what they’re watching. Contra Conspiracy starts off being pretty interesting and different, however. The first two thirds or so is a little more unorthodox, but then it settles into a fairly run of the mill wilderness slog.

Still, it’s better than Skinheads (1989), because Skinheads had so much more potential, and then squandered it on a standard “running away in the woods” plot. While he’s hardly a threat to Chuck Connors, Blake Bahner, Spyder himself, should be used to being in disappointing product - Blackbelt II (1989) anyone? Not a ton happens in this movie, so it runs out of any of the steam it built up initially at about the hour mark.

The paramilitary guys range from meatheady thugs to the classic “weak link” who feels bad for the film crew. Going for them, however, is the fact that they have a camouflage car. Sure, it’s the desert and the car is painted classic green camo, but hey...it may be a gigantic 1984 Buick, but it’s painted camo, so you WON’T SEE IT COMING. Pretty genius. But the good guys have plenty of tricks up their sleeves as well. In order to put the baddies off their trail, the special effects guy sprays fake blood all over the forest. The only problem: the bucket is emblazoned with, in large letters, the words “MOVIE BLOOD”. You’d think it would just say “Blood”. We assume they know they’re working on a movie.

Sure, there’s an effects-test blow up, and a car chase (a CAMOUFLAGE car chase) around the desert, but this is no Deadly Prey (1987). There are some interesting elements, but it’s far from a must-see. Plus, it left the biggest question unanswered: what’s the conspiracy behind up, up, down, down, left, right, left, right, B, A, B, A, select start? The movie was copyrighted 1988. Maybe it knows something we don’t.