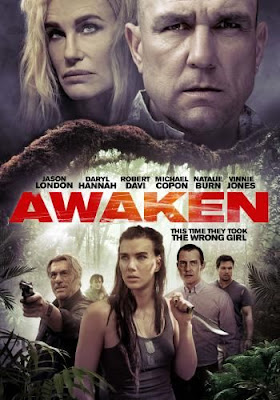 
A woman named Billie Kope (Burn) wakes up on a tropical island and has no memory of how she got there. She eventually meets other people held captive in this mysterious place, including Quentin (Davi), Berto (Furlong), and Stitch (Crawford), among others. While Billie relies on her combat training - by her father, played by Benny The Jet - to stay alive, she does remember she’s searching for her missing sister. Unfortunately, the island dwellers are at the mercy of Rich (London), and his goons such as Sarge (Jones) and Xander (Pare) - who are holding them there so they can harvest their organs.

When an important client, a woman inexplicably named Mao (Hannah), shows up with her ailing daughter, Rich tells the island doctor, Walsh (Keith) to snap into action. However, by this time Billie and her compatriots are fighting mad and are intending to get off the island by using lethal force against their captors. Much like Gilligan’s Island and/or The Prisoner, will our heroes get off the island?

Awaken is sort of a modern-day DTV cross between Avenging Force (1986), The Condemned (2007), and Death Ring (1992). We’re glad movies like this are still being made, but it seems the only place for them to go are cable channels (some might describe them as “deep cable” channels) such as Showtime Extreme. The solid B-Movie cast goes a long way towards sustaining its entertainment value, and main star Natalie Burn certainly has the potential to go far, in our opinion.

Not only did she star in the movie, she has co-story, co-producer, and stunt credits, and even is solely credited with casting. So I guess we have her to thank for getting all these familiar faces together. She even sings the end titles song, “Awaken”, and is/was a ballerina, just like Assassins Run’s Sofya Skya. Is this becoming the new trend in DTV action? Hopefully Skya and Burn will be co-stars in a movie together soon. They could be ex-ballerinas/cops who bust a lot of heads and fight their way up a drug ring to the evil mastermind. If anyone reading this produces these types of movies, give us a call. 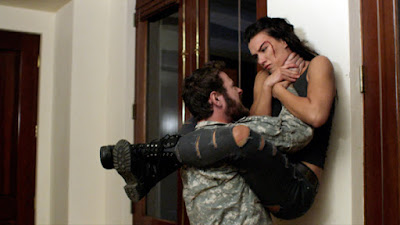 There are also some similarities to Gina Carano’s In the Blood (2014) - and even the recent Van Damme movie Pound of Flesh (2015). Maybe it’s not just ballerinas turned action stars that are the new trend, evidently organ donation is hot now too. Thankfully, Awaken combines the two. While the movie as a whole looks good, and you can see Burn’s fights well, there are some poor editing choices which mar the overall pretty cinematography. These are especially evident when someone gets tasered, the scene with the shark attack, and the Michael Pare-Vinnie Jones fight. Sadly, not only was the latter edited badly, but it should have gone on longer and been more built up in the movie. That’s the match-up we’ve been waiting for, and it’s over in a flash.

Fan favorite Robert Davi wears a John Travolta/Nicholas Cage-style wig, Daz Crawford is likable, and Vinnie Jones is his usual head-butting self that we all love and enjoy. Pare isn’t in it all that much, nor is Edward Furlong, who...let’s just say it’s a good thing that people stranded on the island are supposed to look disheveled and tired. Daryl Hannah, fresh off of Death Squad (2014) adds...something, but we’re not sure what. It looks like she’s finally joined the ranks of us lowly DTV dwellers. But I blame Hollywood for that. Because Hollywood sucks and seemingly only releases remakes, sequels, and superhero movies, there’s no place for actresses like Hannah there anymore. And if Hannah’s not going to the theater any longer, Furlong et al. certainly aren’t either. But they’ll always have a home in DTV - surely they can give Natalie Burn a call anytime.

It all ends with a very, very silly shootout, just as the audience’s patience is wearing thin. Awaken is by no means a bad movie, but it ultimately fails to capitalize on all the assets it had at its disposal. We’re hoping Burn goes up to the next level for her next outing. 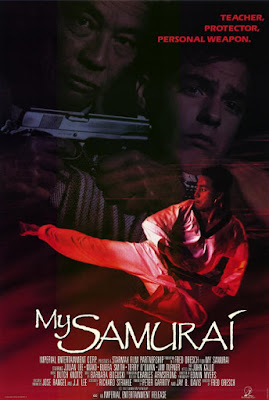 “I left without my wallet.” - Young Park


Peter McCrea (Kallo) is a terminally depressed youngster whose dad, James (O’Quinn) forces him to take Tae Kwon Do. However, his instructor Young Park (Lee) believes in him. Mr. Tszing (Mako) is a gangland boss who commands an army of funny-looking thugs. After getting involved in some police corruption, Tszing’s gang shoots some people. The only problem is that the dour Peter child witnesses this. Now on the run from the baddies, Peter, Park, and James’s secretary, Deborah (Hart) have to run from place to place, avoiding death at every turn. Along the way, not only does Park get into a bunch of Martial Arts battles, he also attempts to teach Peter about life, Tae Kwon Do, believing in yourself, and all that jazz.

During all this, they run into a man named Reverend George (Smith). This wouldn’t be relevant but for the fact that it happens to be Bubba Smith. Will Peter get out of the doldrums? Will Park connect his punches and kicks? Will our heroes escape the baddies? Perhaps we shall see...

A low-budget independent production starring a lot of strange-looking non-actors. Broken-English dialogue on top of a muffled, unhearable sound recording. Amateurish writing, directing, acting, and other technical qualities. Flat line readings. Squealing guitar on the soundtrack. Warehouse fights. Middle-Aged Punks. We’re home. Clearly a movie in our wheelhouse, as any regular reader of our site knows, My Samurai would fit nicely on the shelf next to other product released on Imperial Video. It’s close in spirit to the output of Ron Marchini, which Imperial trafficked in. It would also fit nicely on the shelf next to items like Hawkeye (1988) or Kindergarten “Ninja” (1994), though those movies are a lot more fun and entertaining than this one is.

The whole movie screams “dumb/awesome regional production made to sit on video store shelves in 1992”. Though it is quite stupid, childish, and repetitive, My Samurai will, if nothing else, remind you of those precious video store memories. It seems unlikely that very many people took this off their local video store shelves and actually paid money to rent it, but it’s easy to picture it being there amongst all the other choices.

We don’t know how much penetration into stores across our great country My Samurai actually had, but maybe - just maybe - if all the Schwarzenegger, Stallone, Seagal, Van Damme, Jeff Speakman, Richard Norton, and Jay Roberts, Jr. movies are all rented out on a Friday or Saturday night, and My Samurai sits lonely on the shelf, a 12-year-old boy somewhere picked it up and took it home.

Which leads to the fact that, supposedly, this movie is rated R, but it feels more like PG. When you get to the scene with the “Birds of Paradise” gang - the aforementioned Middle-Aged Punks all wearing different colored Spirit Halloween wigs - you’ll know what we mean. These guys are so non-intimidating, they make the cast of Cocoon (1985) seem like the Latin Kings. Is THIS what Young Park is protecting Peter from? seeing as Peter seems suicidal throughout the movie, you’d think he’d welcome death (?) at the hands of the Birds of Paradise.

Now, it seems rather obvious that this is meant to be a DTV version of The Karate Kid (1984) and/or My Bodyguard (1980). However, Young Park is a Tae Kwon Do instructor - not a Samurai. Did the writers think all Asians are the same? Not only is the title of the movie inaccurate, it’s also totally racist. I think I need to run to my safe space. In the cast department, you get plenty of Mako, which is always a good thing, and a bare minimum amount of Terry O’Quinn, but you have to wait over an hour for Bubba Smith, and what Bubba you get is minimal Bubba. We’ve seen better Bubba. Much better Bubba. It made us long for the magic of The Wild Pair (1987).

So, My Samurai might not be for everybody - or anybody, come to think of it - but those with childhood memories of video stores might appreciate the nostalgia factor. It’s not what you’d call good, in most senses of what we all understand that word to mean, but if you’re a certain kind of movie watcher, that might not matter to you. It’s certainly never stopped any of us before, has it? In the end, what My Samurai lacks in quality is made up for by the archaeological value. Whether that’s a bargain you’re willing to make is up to you.