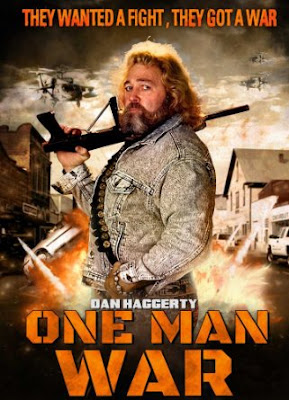 
When hirsute rambling man Cole Jackson (Haggerty) returns to his rural Southern hometown of Macon County, Texas (which you’d think would be in Georgia), he rustles up a whole heap o’ trouble and becomes good ol’ boy enemy number one when he stumbles upon some illegal dealings. Smuggled goods, government cover-ups, threats, kidnapping and perhaps even...murder are all part of the corruption currently enveloping Macon County, a known hotbed for such things.

Even though he’s staying with his younger brother Nathan (Jennings) and his wife Jenny (Bryant), Cole gets shot and spends the vast majority of the running time in a hospital bed. Will the Jackson family (not including Tito) clean up their town before it’s too late? Or will they just swig moonshine out of a glass jug until blindness sets in? Dare you find out today?

Despite the title and the promising prospect of Dan Haggerty shooting lots of people, One Man War (or Macon County War if you prefer, not to be confused with the Macon County series - Macon County Line, Macon County Jail, and Return to Macon County, from 1974, 1975, and 1997 respectively) is a disappointment. Haggerty is indeed likable, but he’s not in the movie enough. Watching his hair was the mane part of the movie for us (sorry).

We kept asking, “why is this a movie?” - as a window into a living room, perhaps it works on its own terms, but why is there an abrupt jump cut to Nathan feeding the ducks? He picks up his gun and then shoots nothing and comes back a few minutes later and puts it back where he found it. If you’re aiming for action fans to view your movie, that’s not a good way to win their hearts.

Like Lethal Force (2002), we were sucked in by the cool title and then left with scraps of nothingness. The whole outing is dull and repetitive. It makes Radical Jack (2000) look like a masterpiece. There are some amusing (?) older gentlemen in the cast, which perhaps was a precursor to later McCormick movie The Protector (1999), where Ed Marinaro and Lee Majors took center stage. Hard to believe this is only the second directorial effort from McCormick, coming just a few years after the underground cult horror gem The Abomination (1986). Two more different projects you cannot imagine, but perhaps he was showing off his range.

While we know something underhanded is going on in Macon County, it’s never clearly explained just what it is, except maybe right at the end when we’re not interested anymore. There is a secret warehouse right out in the open, hiding away barrels of a translucent green liquid. We only could surmise from this that they are involved in the illegal importation of Hi-C Ecto Cooler. They’re clearly hiding it from Slimer as they brew their own homemade batch right next to their moonshine.

Taking the concept of a “sit-down” role to a new extreme, Dan Haggerty comfortably LAYS down in bed for a lot of the movie’s running time. But wouldn’t you if you were in his shoes? Though to be fair, Haggerty’s hair isn’t the only point of visual interest - Jenny’s acid washed jeans provided a welcome oasis for our eyes amongst the nondescript morass of the rest of the movie. It should also be noted that there are some weak gun-shooting scenes, some limp car blow-ups and a laughably awful exploding helicopter.

We’d say watch an episode of The Dukes of Hazzard instead of One Man War, but, due to political correctness, it’s been yanked (no pun intended) from TV. What’s this world coming to? And who ever would have thought One Man War would outlive and be more readily available than The Dukes? There isn’t a lot to recommend with One Man War. Go on YouTube and watch The Abomination instead. 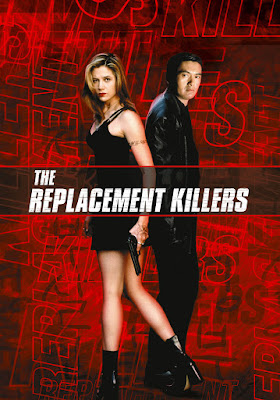 
John Lee (Yun-Fat) is an expert marksman/gunman/assassin/gun enthusiast who works for crime lord Mr. Wei (Tsang). All his life he’s followed the orders of his superiors, but when his latest hit is meant to be carried out not just on a hardworking cop named Zedkov (Rooker), but also his seven-year-old son, Lee finds he can’t pull the trigger. In order to disappear and get back to his family in China, he needs forged documents, so he goes to see Meg Coburn (Sorvino), an expert in such things.

Soon enough, Wei sends many waves of goons to kill off the unlikely duo. When an underboss, Kogan (Prochnow), can’t kill them fast enough, Wei sends for “The Replacement Killers” - played in the movie by Schweiger and Trejo - to kill not just Zedkov but also Lee and Coburn. This all sets the stage for lots and lots of gun shooting. Who will get killed and who will get replaced? Find out today...

It seems pretty obvious, especially looking back now, that The Replacement Killers was an attempt to bring John Woo-style action to Hollywood. Woo did act as executive producer, after all, but did not direct the film. That, in this case, went to Fuqua, and this was his first feature-length production after a career making MTV videos in the 90’s, and it really, really shows.

There is a lot of style and flash, but not much of a narrative structure, as you might expect from a background like that, and certainly on someone’s first attempt. (Evidently there was more character development at one point, but it was left on the cutting room floor). If this all sounds like negative criticism, it’s not. The movie is lightweight and entertaining, and without a doubt it delivers the action goods. 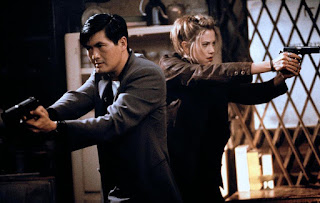 Chow-Yun Fat is one of the coolest cats around, and no one looks more awesome shooting guns or putting on sunglasses. In the 90’s there was an attempt by Hollywood to also put Jackie Chan in theaters, and that was appreciated, but seemingly did not last long. We, of course, enjoyed seeing Operation Condor (1997) and Jackie Chan’s First Strike (1996) on the big screen. If it could be done with Kung Fu, why not Gun-Fu? And who better to play the classic “killer with a conscience” than Chow-Yun Fat? With endless gun battles and slo-mo moments (slo-moments?...actually that would be misleading as there are no slow moments in the film), all set to the sounds of the prerequisite late-90’s electronica such as Tricky, The Crystal Method and Death in Vegas (apparently Portishead was unavailable), how can you lose? If you’re a fan of action setpieces (and who isn’t), you don’t.

Such things as described above were tried unsuccessfully before, i.e. Killing Time (1998), but, thankfully, The Replacement Killers gets the simply-plotted assassin shooting movie right. There’s enough cannon fodder for the good guys to shoot at and it never really lets up.

Backing up Fat and Sorvino is an impressive cast of Comeuppance favorites: Michael Rooker as the cop, Danny Trejo as one of the Replacement Killers, the fascinatingly-named Clifton Gonzalez-Gonazalez (AKA Clifton Collins Jr.)  is the “Machine Gun Joe” character, Patrick Kilpatrick as a baddie, Jurgen Prochnow as another baddie (looking a lot like Robert Davi here), and, in blink-or-you’ll-miss them goon roles, action mainstays James Lew and Al Leong. And at only 84 minutes without the credits, it all comes in at a good running time. More movies - hell, ALL movies - should be 84 minutes. Kudos to the production for a reasonable length here.

So while wags may complain that there’s not much substance and the whole thing is like an extended music video, those people are missing the point. There’s no time to waste as The Replacement Killers remains fast-paced, enjoyable fun.