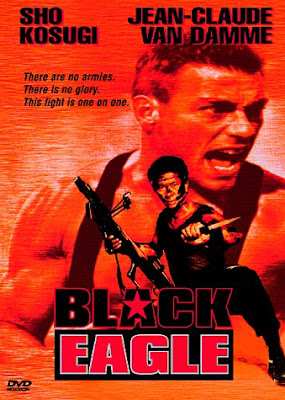 Ken Tani (Sho) is a CIA agent assigned to Malta where a highly sophisticated plane with a destructive weapons system has been found underwater. His goal is to get to it before the evil Russians. The most evil-est Russian of them all is a man named Andrei (Van Damme) and he’ll stop at nothing to prevent Tani from getting to the plane before his KGB brethren.

To ensure Tani does his job, his two children, Denny and Brian (Shane and Kane Kosugi) have been flown to Malta and put under the care of Patricia Parker (Clark), a woman who brings them to museum after museum with a bunch of tourists in order to bore them out of their minds. Well, according to Survivor, it’s “East vs. West, it’s the paradox that drives us all.” Will Sho overcome against Van Damme? Don’t bother finding out today!

Black Eagle is pretty much universally acknowledged as one of Van Damme’s weakest films, especially from among the early part of his career. Well, we would just like to humbly add our voices to the chorus. The simple fact is, Black Eagle just isn’t very good.  And it’s very easy to explain why: it doesn’t work as an action movie, and it doesn’t work as a non-action movie. It’s like two big gears with a wrench right in between them that’s stopping them from turning.

The movie seems like it was made to cash in on the action movie boom of the day, and it was made by people with no grasp of how to make an effective action film. That’s a fatal formula.

Any supposed “action” is limp at best, and what occurs in the meantime is inept and no viewer could possibly care what these people are talking about. When there’s no non-action going on, the movie is filled with moronic dialogue no one could possibly get invested in. It brings us no pleasure to say these things. We wish Black Eagle was better, we really do. But we have to tell the truth. 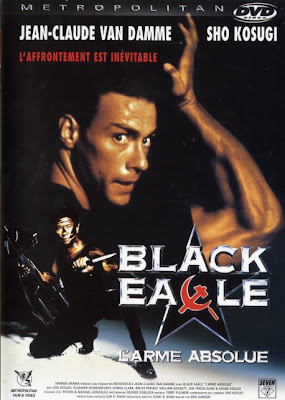 You’d think a movie starring Van Damme and Sho Kosugi couldn’t possibly be lame. It’s a reasonable thing to think, and surely just about everyone who saw the box art for this movie while perusing their video store had the same feeling.

But there’s not just one, but TWO anti-climactic, very brief fights between the two. All the makers of Black Eagle had to do was make a movie about Sho taking down goon after goon in his own inimitable way, until the big fight at the end with Van Damme. You’d think that would be a no-brainer. But oh no, they couldn’t just do that and satisfy the fans.

They had to come up with a bunch of nonsensical claptrap to frustrate audiences. Straining for positives, we found that the movie had some pretty shots of Malta, and to be fair there are a handful of unintentional “laffs” that keep you going until the end, but Black Eagle is truly for Van Damme and Sho completists only. 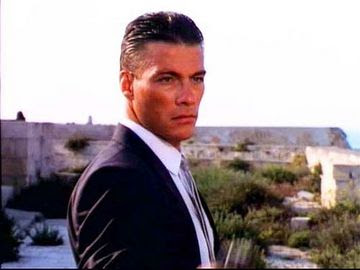 For instance, we have the world’s largest “No Smoking” sign, and Van Damme’s pants are hiked up to the max (and in other scenes, especially some of his hilariously unnecessary scenes where he’s doing a split, he appears to be an old-fashioned strongman, which is very silly).

Sho has some nutty moments of his own, especially when he’s on the deck of a boat, screaming utterly incomprehensible dialogue to other characters on an upper level of the boat. Not only is it unnecessary that these characters be so far apart, space-wise, but Sho screams all his dialogue while wearing nothing but a Speedo and glasses. Talk about a stylish combo. Sadly, this is the only movie where Van Damme and Sho were together. You’d think they would have reconvened at a later time to make a better movie. Maybe there’s still time.

Packed to the rafters with stupidity, Black Eagle is unlikely to appeal to its main potential audience - action fans - and will alienate every other potential viewer as well. Unless you’re in an especially masochistic mood, we say avoid Black Eagle.

Also check out write-ups by DTVC and The Video Vacuum!
Posted by Ty at 3.10.13

This movie was IMO not bad, just average. Eric Karson should have been able to do better. He directed The Octagon, after all. Black Eagle will be released on Blu-ray in Germany in a couple of weeks.

Oh that brings back very bad memories with a'lot of anger, after watching my (then) allowance go to waste with this rental.

Roger: It was pretty weak. Sho Vs. Van Damme should've been a lot better!

Snake: Oh man that sucks! Do you remember what else you rented with your allowance back in the day?

Well Ty, all the rentals until i got my first job was sponsored by the parents. I remember saving my money in school from Monday to Friday so i can go to the video store and rent 2 or 3 movies for the weekend. There was a lot of stinkers and a lot of good rentals. Sometimes i used to say to my mom with puppy eyes "Hey mom, the movie i rented was bad, can you give some money to rent a better one before the weekend is over?". If she said yes i went back to the store and rented something i knew for sure was good because i have seen it before, like let's say American Ninja 2 or Fright Night if i was in a horror mood.

Nice times. If things were better, i would open a video store just to live the "magic" behind the counter.

That is a great memory you have! Used to do the same with my parents about renting more movies at our local video store.

I have to agree. I used to own the DVD. I couldn't believe a movie with Van Damme and Sho Kosugi could end up being so dull.﻿

We are in total agreement on this one. The potential was there but it failed to live up to it. Glad you agree.