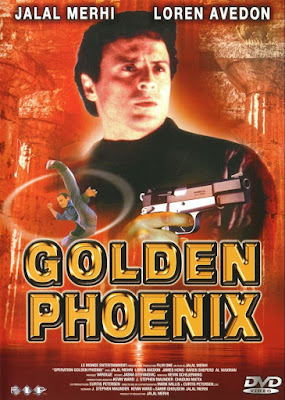 It is said that whoever collects the sacred "Golden Phoenix" medallions of Lebanon will be led to a secret hiding place where riches will rain down upon them. That's why rivals Mark Assante (Merhi) and Ivan Jones (Avedon) are both after the medallions. It seems Ivan is the baddie in this situation because he's working with a diabolical mastermind named Chang (Hong). The quest for the medallions goes from Beirut to Toronto to Lebanon, where Princess Tara (Sheperd) comes into play as another treasure hunter. Naturally, there are plenty of fights and blow-ups that happen along the way. Who will find the treasure at the end of OPERATION GOLDEN PHOENIX?

Much like how Reese's Peanut Butter Cups were once touted as "Two Great Tastes that Taste Great Together!", now, finally, we have Jalal Merhi and Loren Avedon co-starring together as ultimate rivals in a battle for the ages. It has been said that - allegedly - these two men were difficult to work with, so it makes sense that they could only work together. Neither Merhi nor Avedon were ever the most likable action stars out there, and that doesn't change for Operation Golden Phoenix, but you may be surprised to know that we liked the film overall. Here's why. 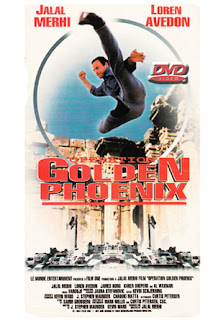 It's very, very silly. It's also, in the best, most complimentary sense, stupid. It attains the kind of silly-stupidness that makes it enjoyable to watch. The opening shootout scene, with all its shooting, blow-ups, and fights, is a remarkable cross between technically very well-done and impressively executed stunts and pyrotechnics, with amusing "facepalm" staging.
Another movie highlight comes when Merhi has a fight on a bridge. Dressed in a denim button-down shirt and jeans, Merhi looks alarmingly like Jay Leno. This might not be notable in and of itself, but his opponent strongly resembles Freddie Mercury. If you've ever clamored for a Leno-Mercury brawl to end 'em all, your prayers have now been answered.

Which leads to perhaps one of the greatest strengths of OGP. (Don't worry, we're not going to ask if you're "down with" it). The scenery is really impressive in this movie. At times it's downright stunning. The filmmakers chose some really breathtaking locations to stage the fight scenes. The bridge setting was good, but it was just the beginning. The final fight takes place at what looks like an old archaeological site that would be perfect on an episode of Ancient Aliens. If memory serves, Baalbek has been mentioned on that show.

Other highlights include the scene where Assante (not Armand; in this case it's Mark) gets arrested and put in a holding tank. He's surrounded by toughs, and guess what happens? A fight breaks out, but what's funny is that the holding tank is notably (excessively?) large enough to accommodate a healthy brawl.
Additionally, both of the main characters are exclusively called by their full names. It's always, "Ivan Jones did this" or "Ivan Jones did that". He's really just Ivan to us. Al Waxman, so memorable from The Hitman (1991), has a sort of thankless role here as Chief Gordon (of course his name is Chief Gordon). It also would have been nice to see more of Karen Sheperd in the film, but we're just happy she was involved.

Also when the main professor is kidnapped so he can translate what's on the medallions (using an old Apple computer, of course), for some unknown, unfathomable reason, this poor man is shirtless. He looks to be in roughly his 60's and resembles Uncle Leo from Seinfeld, but he's shirtless. No explanation is given. He spends the entire rest of the scene that way. It's one of the many mysteries of the Golden Phoenix, perhaps even more so than the medallions themselves.

All of what we've just described - and more - is all topped off by some extremely funny line readings, accents, grunts, yells, screams, dubbing, and other strange sounds from the participants involved. It keeps the movie afloat most of the time. Yes, it does slack a bit in the middle, but that happens a lot in these B-actioners. The final fight and the shirtless professor more than make up for it.

Surprisingly, OGP got a VHS release not on a small label, but on a major - MCA/Universal. Even with that, the VHS is not an easy one to come by. Perhaps the big company got cold feet with their release and had no faith in the film. Then they just didn't print that many copies for wide release. That seems to happen a lot. So with that in mind, if you ever see the tape anywhere, definitely pick it up.

We have to say that Operation Golden Phoenix was a pleasant surprise. We didn't go in expecting much, but we came out smiling. While Avedon and Merhi might not be your favorites, don't let that stop you from checking this movie out. You'll most likely enjoy it a lot.

Avedon is one of the greatest, underrated.

He's at his best here and No Retreat, No Surrender II\III