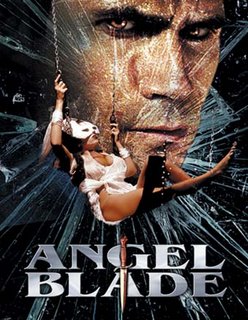 David Heavener is stuck in the 80's. Angel Blade is filled to the brim with 80's cheese. First the casting: Margot Kidder, Marc Singer and everybody's favorite actor, David Heavener.

Then the plot: A cop at the end of his rope (Heavener) has to find out who is killing hookers. But not just your ordinary hookers, PREGNANT hookers. It can't get any more sleazy than that. Not that sleaziness is bad, but when it is acted, edited and directed in a lifeless and horrible way, all you can do is stare at the griminess dripping off the screen.

I like David Heavener, but he puts in a poor performance this time around. Instead of Heavener always writing and directing himself, He should give someone else a job for once.