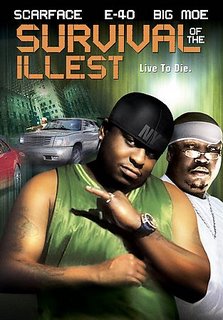 
Nothing much happens in this one. There's no plot at all. It's just scenes cobbled together with rappers "acting". I guess Big Moe and E-40 put in good performances....not much character development on either one. Here's what I can gather: There's a gunfight, some talking in a poolhall, and another gunfight stretching the running time to 85 minutes. The best part is the opening shootout because when people get shot they forget to die. It's funny and ridiculous.

Email ThisBlogThis!Share to TwitterShare to FacebookShare to Pinterest
Labels: 2004, Big Moe, Direct To Video, E-40, Scarface, Survival Of The Illest