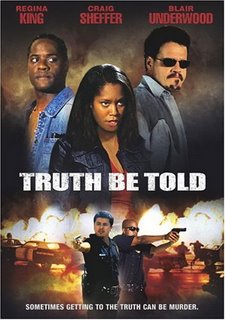 Truth Be Told is a boring cop thriller that's not very thrilling. Cops Stratten and Harris (Sheffer and Underwood) are corrupt cops after some dirty money. There's a doublecross involving Rayne (King) too.

The problem is that nothing happens in this movie. The movie stares back at you with a blank expression. If you look at the cover, it looks like an exciting action thriller. The Lionsgate company always practices the "art of the deceptive cover". This is no exception.

Could you write an article in 'cool info' explaining the "deceptive cover" in more detail?