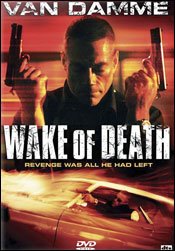 
Wake of Death is one of the best Van Damme movies ever. He has been making an effort to make all his releases better than Seagal. He has definitely succeeded. When you first see the cover with Van Damme brandishing two firearms, you think, "This is gonna be awesome!" and you'd be right.

Ben Archer's (Van Damme) wife is brutally killed by gangster Sun Quan (Yam). Like the tagline says "All that's left is revenge". The whole movie is different from the usual action flick for example:

Acting: Van Damme's best peformance yet. Critics who called him "Stiff as a Board" won't be saying that this time around. You really feel for him when his wife is killed.

Action: "Wake Of Death" pumps up the action quotient by 110%. All the action scenes are brutal and contain a lot of blood. But every bad guy deserved it. The motorcycle chase in the mall is very exciting. The final battle in the shipyard is awesome.

I find this one a slog. JCVD invests himself in a great character, but one which is underdeveloped. I agree that the mall scene and at least some of the climax is really good; Tony Shiena's knife fight with Philip Tan is the best bit (but can you really be killed by a knife to the crotch?), while the showdown between JCVD and Simon Yam's villain is rubbish. The 'all guns blazing' arrival of JCVD's Ben Archer seems it should have got his son killed. That Yam's callous gangster doesn't do as threatened made no sense to me. The main problem I had with the film is its over-editing. Trying to be stylish and meaningful (bringing to mind CRYING FREEMAN), while at the same time being completely shallow and pretentious. The tedious opening titles sequence is the big warning sign. All that said, there's elements of a really good film in here. So that makes it worth seeing. It's certainly an interesting film, and not dissimilar to Seagal's OUT FOR A KILL made around the same time. So they make for an intriguing, if disappointing, revenge double bill.

I liked this one a lot more than you and Brett! Solid Van Damme overall, but i see your points though.