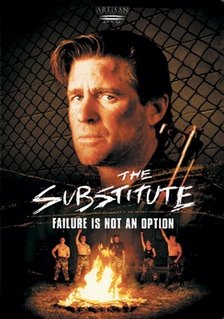 
This is the weakest entry in the "Substitute" series. The third one is the best.


Karl Thomasson (The Treatster) has to infiltrate (Again! Why does Karl keep doing this?) a white supremacy gang run by Brack (Patrick Kilpatrick) in a military base.


"White Power" is of course uttered. Repeatedly. Can Karl save the base from total Aryan destruction?


This movie is an excellent definition of "Going off the rails". Treat is good as usual, but he can't save the film. Even Angie Everhart's nudity can't save it. It's a disappointment. The action scenes feel rushed and the viewer gets the feeling that no one's heart was in this project.

Bill Nunn makes an appearance as a local weirdo named Luther. He does nothing except beg for our pity. He said yes to the odd role probably as a favor to Williams.