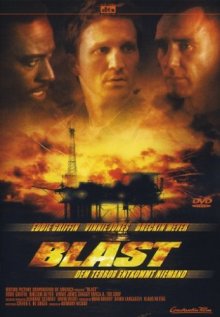 
Blast is an entertaining flick.

You don't take an action film seriously with Eddie Griffin and Vinnie Jones. The plot is about Lamont Dixon (Griffin) who is an ex-fireman\tugboat captain. He is working on an oil rig at Christmas time when terrorists led by Michael Kittredge (Jones) hijack the crew. Kittredge has a electronic device that can destroy California. Now it's up to Dixon to save the day.

Eddie Griffin was a pretty good action hero. Vivica A. Fox goes through the motions as the head FBI agent. Breckin Meyer has a silly name (Jamal), and a couple good lines and Vinnie Jones plays the evil villain role well. No one should care that Blast is direct-to-video. If you want an exciting and funny action\comedy, this is it.