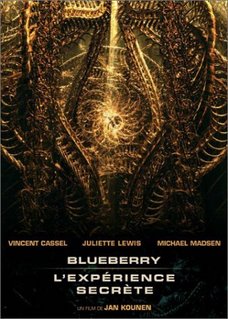 
Blueberry or "Renegade" (U.S. DVD title) is an interesting movie but it will give you a headache. Vincent Cassel plays Mike Blueberry, who is the Marshal for a old western town. Michael Madsen co-stars as his nemesis Wallace. Juliette Lewis plays Maria, who falls in love with Mike. 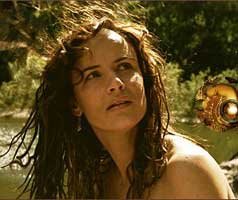 Also appearing in Blueberry: Ernest Borgnine, Eddie Izzard, and Djimon Hounsou. They all do a good job, with Madsen standing out as the bad guy. Lewis sings (poorly) but does get nude towards the end. The movie is overshadowed by almost non-stop CGI effects. The climax between Wallace and Mike is one the weirdest things ever. They both drink peyote and have hallucinations. All these hallucinations will give you a headache.

There is also some unintentionally funny dialogue like "Animals are beasts, but men are monsters" 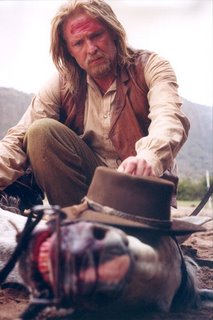 It's a different type of movie and it's worth seeing once.

Yeah, 'Blueberry' is a mixed bag. I was expecting more of a standard western. You know, guns, shootouts, and so forth.

Still, it has beautiful cinematography.

So much peyote, not enough gunfights!

Yeah, this is a great underrated gem. Sure, it's a little slow paced but it's got some great performances (Cassell and Madsen) and some truly weird sequences. I love that the final confrontation isn't a classic quick draw but some bizarro drug trip.

The ending felt quite similar to 2001: A Space Odyssey. Also, just watched the lousy Jonah Hex the other day - which had a similar idea with Brolin and Malkovich fighting in the real world and the "nether" realm.

If you get the chance, check out Jan Kounen's other film Dobermann.