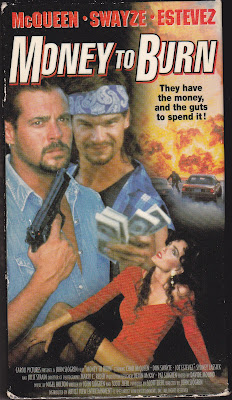 
"They have the money and the guts to spend it!" - the tagline (that should indicate the level of intelligence at work here).


"Money To Burn" is dumb...really dumb. It makes Beavis and Butthead look like Masterpiece Theatre.

The plot is minimal: Two mentally-challenged pals named John and Scott (McQueen and Swayze...by that I mean Chad and Don) come across some illegal money from some bad guys. Lt. Ford (Estevez) is watching some surveillance footage of a bank heist and stays in the same room for most of the movie, looking at the same bit of video, which is repetitive and maddening at the same time. Even the presence of the "wacky" security guard can't save these unending sequences.

John and Scott go on a spending spree which takes up most of the movie. They buy guitars at Guitar Center and at least one other shopper stares at them and smiles as they "rock out", as if to say, "you guys are some wicked awesome dudes and you totally rock"...seemingly unaware these are some of the biggest dum-dums alive.

A further example of this, as if one was needed, is that when Scott's Grandma inquires about their doings, they say, REPEATEDLY, "It's for a school project". It is not explained what type of project, not to mention what type of school, these two sub-literate dirtbags in their mid-thirties were admitted to.

They buy some hot cars, a mansion in Malibu and they naturally do what any nouveau-riche do: ride their BMX bikes in the pool. This scene of bike-pool riding represents their newfound decadence and how blissfully unaware they are of EVERYTHING, not the least of which is that the baddies are closing in and they have guns. The problem is, you don't really care if Scott and John get shot, in fact you're kind of banking on it.

McQueen and Swayze play dumb a little TOO well. I mean, they're supposed to be dumb, but, come on. Is there really any joy in watching a movie with characters and situations that are this dumb? Only the viewer can decide. But watching Money To Burn is a great way to lose brain cells without the use of drugs or alcohol. 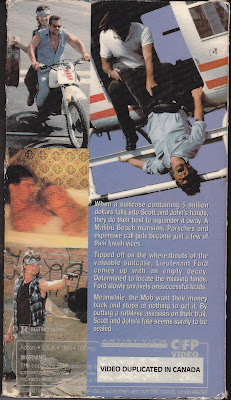 The front of the VHS box loudly states "MCQUEEN-SWAYZE-ESTEVEZ", conveniently leaving out the first names in a bold faced attempt to trick the viewing public. However, it could be said that this movie brings shame on these famous Hollywood families. Even the appearance of Chuck Zito and the brief appearance of Julie Strain can't save this disaster of dumbness.

Yes, we ACTUALLY watched "Money To Burn". For all its flaws, and they are many, for some reason, it IS entertaining, and provides some great unintentional "laffs".

Squander your time with this classic tonight.

Comeuppance Review by: Ty and Brett
Posted by Ty at 4.5.10