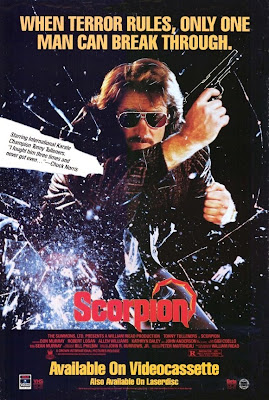 
"When Terror Rules, Only One Man Can Break Through!"

The one and only Tonny Tulleners stars in his one and only movie role as Agent "Steve Woods"and gives a appropriately wooden performance, but what else would you expect? He's not an actor. He is a karate champion who beat Chuck Norris at least once in real life. His agent codename is "Scorpion"....you don't want to get stung by this guy!

The action "kicks off" in Spain when Tonny injects himself into a barroom brawl. We don't know why but he looks cool with his killer 'Stache and a nylon jacket with brown bellbottoms and boots. Then after some confusing and unnecessary location changes, hopping from Spain to Holland to Hawaii and finally settling in L.A., the story begins.

In a plot that is as relevant today as it was in 1986 (when the movie was made), terrorists take over an airplane and only one man can stop them... "Scorpion" of course!

In an actual plot point, Woods' boss, who looks a lot like Phil Rizzuto, tells him to wear shorts when boarding a plane that terrorists have taken over. It is still on the runway and filled with hostages. The reasoning is that the terrorists will see he is not carrying a gun. Woods takes his pants off and changes into some white short-shorts. Little did the terrorists know, his fists n' feet are the real weapons. Most of the hijackers are dispatched in short order. The main baddie, "Faued" is left alive and then a 90 minute cat & mouse game ensues....Tonny style.

A creepy looking blond guy and his black partner stalk Tonny and eventually get beat up by him, and unfortunately in one of the many melees, his partner and childhood friend kicks the bucket. There is an emotional flashback of Tonny and his friend in a park where they demonstrate their strength and try to push over a statue. This strength wasn't enough to save his friend later in life. Tonny is very broken up about it. He is tough man, but he has a soft heart (and a soft voice to match). His new partner inexplicably carries around a wooden recorder and starts playing an annoying tune. This clown can't live up to Tonny's fallen partner.

A highlight of the film is the rockin' music. It was probably made by a guy playing the keytar and making a wicked "Keytar face". Tulleners beats up the bad guys with quiet diginity and grace.

Get beat by Tonny once tonight with this classic!

Finally got around to watching this and was surprised to find that this is more of a police procedural than a martial-arts film.

The action was rather unspectacular, but as a general crime movie, it was oddly effective. Tonny rocks some incredible outfits in this one and sports the best mustache this side of Magnum P.I.

Tonny was great! Wish he made more movies!