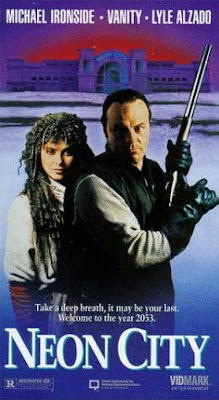 
In the year 2053 the world is a post-apocalyptic wasteland. In this movie it is called “The Outland”, with a blatant disregard for the Sean Connery film of the same name. “The Outland” doesn’t have a lot of clean air or water. People are eating dogs for sustenance.

Enter Harry M. Stark (Ironside), a no-nonsense bounty hunter who looks like Jack Nicholson. His job is to bring Reno (Vanity) back to Neon City. He handcuffs himself to her because she is always escaping. There are so many outlaws in “The Outland” that one can collect “Red Star Credits” for bringing them to justice. What you can exchange these for aren’t explained. Is it like Skee Ball tokens or “Coconut Coins”?

The world may never know.

Luckily there is a bus going to Neon City. The movie never explains where they are and how long it takes to get to Neon City. The bus driver is named Bulk and he is played with aplomb by Lyle Alzado. As if the name “Bulk” wasn’t enough, he is nicknamed “The Killer Tomato” because “He crushes people’s heads as easily as an overripe tomato”. Bulk and Harry don’t get along at first because Bulk is an ex-con that Harry brought in. 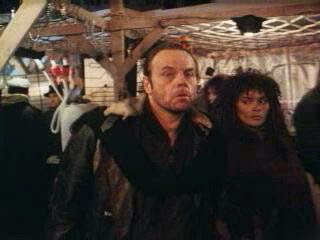 Also going to Neon City in this bus are a bad stand-up comic looking for work, a sketchy doctor with a mullet, a spoiled rich girl and a woman who looks like Hillary Clinton. Riding shotgun with Bulk for most of the journey is a mysterious Asian man named Wing (Arsenio “Sonny” Trinidad)

Along the way there are many obstacles and pitfalls. Besides the obvious personality clashes, there are roving bands of killers dubbed “Skins”. They ride souped-up, broken down motorcycles if such a thing is possible. They are continuously chasing the bus and shooting at it. We don’t know why. Stark shoots back with a laser that makes a classic laser noise: “Pew! Pew!” The many chase sequences are very repetitive and strongly reminiscent of the “Orange Grove Chase” from the classic Cobra (1986).

Other dangers our heroes have to face include something called a “Zander Cloud” which is a poisonous cloud. It would make more sense if it was a “Zzand Cloud”. Similarly, there are some hot lights which are a silly menace that pads out the running time. Not to mention if they are so hot, why don’t they melt all the snow around the area?

They take a million breaks on the way to Neon City and they could have gotten there a lot faster. The importance to getting to Neon City is negated with all the breaks. One of the important breaks involves healing water that Harry and Reno take. It doesn’t make much sense.

After all those breaks, they finally get to Neon City which is just a “Neon Room” (No city is actually seen) They are welcomed into the room by none other than “The Office’s” Creed Bratton (Who was also a grip on the film). Already overlong at this point, after multiple endings Stark confronts his commanding officer (who is also evil) and is named “Jenkins”.

There are some twists as far as relationships are concerned: Will Stark and Reno stay enemies or become an item? Will that annoying comic get his comeuppance for selling poison to cave-dwelling burn victims? And will Bulk get his wife’s ring back from the “Skins”? and is Wing (once again played by Arsenio “Sonny” Trinidad) who he seems to be? All will be answered if you watch the entire thing.

Neon City closely resembles the recent box office smash The Book Of Eli (2010), obviously the Hughes Brothers closely studied this flick. Honestly, the movie is a Mad Max (1979) knockoff and scenes from it are ripped off wholesale.

Make sure to watch Neon City in the future!

Interesting side note: Fan favorite Chuck Zito did some stunt work on the film.

Comeuppance Review by Ty and Brett
Posted by Ty at 13.5.10

Just got done watching this one. I think I'm with you on 2 and 1/2 stars. There was a lot I liked, a lot that was silly, but it also overstayed its welcome by about twenty minutes for me, which was crucial. Still you gotta love Michael Ironside.

Happy you agree. This could have been so much better, but it was nice to see Ironside and Creed Bratton.