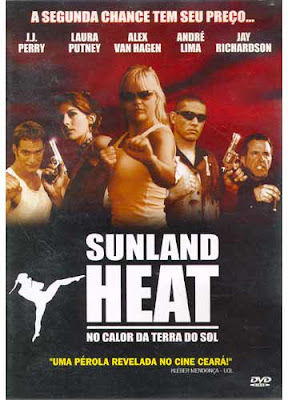 Sunland Heat is a average action movie. Alex Van Hagen plays Jennifer. She leaves her abusive husband Daniel (Richardson) and goes into hiding in Brazil. Jennifer then meets Matthews (J.J. Perry) and she falls for him. Daniel won't leave without a fight and kidnaps Jennifer's daughter and sends goons after her. Can she escape from his clutches?

The acting is very weak. Everybody goes over the top especially Jay Richardson and Alex Van Hagen. But the fight sequences are decently filmed, and the locations look great.

In the end: The acting isn't the best, but the fight scenes are OK and because of that it's worth seeing once.

SUNLAND HEAT (DRAGONESS here in the UK) is not a good film, but it's interesting for a few reasons. Made in Brazil, it's perhaps the only major acting role for the brilliant J.J. Perry. It certainly is the only credit for lead actress Alex Van Hagen, about whom it's hard to find out anything. It's also one of the few films with André Lima, who ended his film career with the self-penned vehicle BEYOND THE RING a few years later - which J.J. was second unit director for. J.J. was responsible for the handful of action scenes in SUNLAND HEAT and they're short and sweet. He and the other performers move well and are shot well. The film, which is very low budget, uses a lot of handheld camerawork. But it works; adding intensity to the sequences and not just causing confusion. It's not shaky cam. Those notable features aside though, it's not a good film. Alex Van Hagen is the lead but has less to do than co-star Laura Putney (whose film TAIL STING I really enjoy), who has her own climactic scene with the film's villain Jay Richardson after Hagan's. The film is oddly structured and at times very confusing. As an example, there's a random shot of a woman at the end who is character from earlier in the film, but the shot is not part of a scene and has no context. It's a bit of a mess. But fans of J.J.'s work must see it.

Love hearing all the information about the movie! We appreciate that Richard! That's very informative. Thanks!