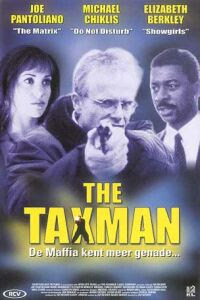 This was the first DTV movie I'd ever seen, and it truly started it all when it comes to empire of Comeuppance Reviews. I was entranced by its shiny metallic box art.

This is an offbeat, often funny film about a taxman who is investigating a crime when he meets a Russian family and eventually begins to care about them. There are twists but it is mostly a character driven film.

Joe Pantoliano is (as usual) great as the taxman. Elizabeth Berkley does a good job as the Russian daughter. Her accent is on target. Robert "The Meteor Man" Townsend is also in it who does an okay job as a lawyer.

Joe Pantoliano never gets praise when praise is due. He always puts at least a little effort and energy into all his roles. He usually steals all the movies where he is a supporting character. As evident with this film, he is definitely ready for lead parts.