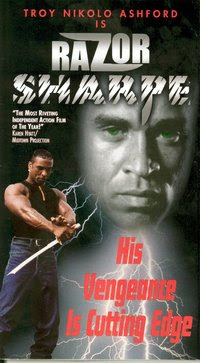 "Our destiny is not by chance...it's by choice" - Troy "Nicolo" Ashford

"The most riveting independent action film of the year!"
- Karen Hyatt, Midtown Projection


Razor Sharpe is a shot-on-video vanity project for one Troy Nikolo Ashford. For some of his many credits in the movie (writer, stunts, producer, director, etc., his middle name is spelled "Nicolo" with a C, other times it is "Nikolo" with a K).

It is extremely admirable that TNA (Troy Nikolo Ashford, not the wrestling organization) was able to film this and get it out there. Sure, it's mainly a non-professional production, but somehow he actually got it out there and in to stores. That is very commendable.


TNA plays Justin Sharpe, an action movie star who is kicked off the set of his latest project when he catches an arrow shot from a bow and arrow. His agent calls him "leper boy" and only his "comical roommate" can console him with his comedic stylings. Rik Cooper, his egotistical co-star, doesn't appreciate this very much.

Then, Sharpe accepts a job on another set where he is tricked into committing a real-life crime. Somehow he doesn't catch on while a shooting is taking place. Then, Sharpe's girlfriend is kidnapped by thugs and Sharpe is now on the run trying to save her. Add to that two cops following the situation, one of whom looks EXACTLY like embattled golfer Tiger Woods. Will Sharpe cut a swath through all the baddies in Georgia? Find out tonight!

Of course, Ashford casts himself as a movie star, and has at least one unnecessary training sequence (it's before any conflict occurs in the movie, so he's not training FOR anything). He meditates with a bottle of Coca-Cola and takes his shirt off often.


During the credits sequence there is a "Razor Sharpe" song. It could have been better. Also, the guns don't really shoot and the actors' outfits change mid-scene, but on the bright side, there are some decent stunts, and the "comical roommate" should be the next Mike Epps and gets off a few good zingers.

Everyone involved seemed to be trying their best, and we truly wish effort alone was worth more in this world, because it is obvious a lot of good effort went into Razor Sharpe. But there are a lot of choices for action out there, and it seems hard to believe someone would choose Razor Sharpe over something else. Like, say, Night of the Kickfighters (1988).


We say congratulations to Mr. Ashford and his worthy effort, but the lack of professionalism and shot-on-video quality is amateurish. Too bad this is his only credit, as he may have improved given some time and experience.