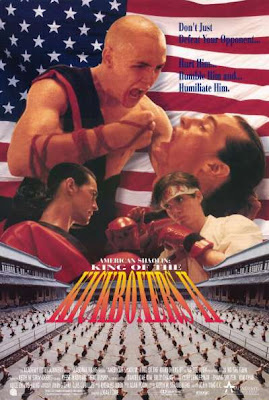 
You better watch out for Trevor Gottitall (Bushey). Just by his name you can tell he is an evil, arrogant jerk with a ponytail. He is a kickboxer whose finishing move in the ring is to pull down his opponent's pants. Really. Fighting in a match with Trevor in front of an enthusiastic audience, young, idealistic fighter Drew Carson (Madigan) loses to Trevor's underhanded tactics and is humiliated when he falls prey to his infamous coup de grace. After consulting with his elderly master, the All-American Drew goes all the way to the original Shaolin Temple in China to become a monk. While there, the monks teach him, and he teaches the monks, and his fellow disciples a thing or two as well. After an unspecified length of time at the temple, Drew emerges to take on Trevor Gottitall in a rematch.

American Shaolin: King of the Kickboxers II, despite being one of the longest titles of its many titles, doesn't feel like a long movie while you are watching it. It is quite entertaining and enjoyable.

Madigan is perfectly cast as Drew. He starts out as a "typical" American with his omnipresent backwards baseball cap, yellow walkman and sports jerseys. Through his disciplined training, he learns humility and grace. But not before teaching his fellow students how to dance and sing American rock and roll. A highlight of the film is an impromptu music video where Drew leads his fellow monk hopefuls in a rousing rendition of "Summertime blues". While they are cavorting around using sticks as guitars and microphones, Drew changes the lyrics to "Ain't no cure for the Shaolin Temple Blues". If you don't wince in embarrassment, it is charming. Later, at another dance sequence, the one and only song is "Summertime Blues". It must have been the only song the production could afford. Also Drew teaches his Chinese friends about the ancient art of Playboy magazine and pranks. This Martial Arts film almost becomes an 80's romp when they try to pull a prank on the head monk. The film is mainly a long training sequence, and the title would seem to indicate that this film is a reference to "The 36th Chamber of Shaolin". The culture shock is a major element. He must overcome some prejudice as a Chinese monk says about Drew, "this Monk smells". Apparently anyone can just show up at the Shaolin Temple, provided they sit outside on a tree stump for a day or so.

Interestingly, this film bears no relation to King of the Kickboxers (1990), starring Billy Blanks. Speaking of things bearing no relation, the box art for the Academy VHS release is somewhat misleading. It makes it seem like a dark, disturbing and angry punchfighter. The truth is that it is fairly light-hearted and there are many life lessons in the film.

"AS:KOTKII" is an above-average film of this kind. The actors seem to care about the proceedings and the audience gets sucked into the plot, despite some cliched touches here and there.

Your collection hasn't "Gottitall" unless this is in it!