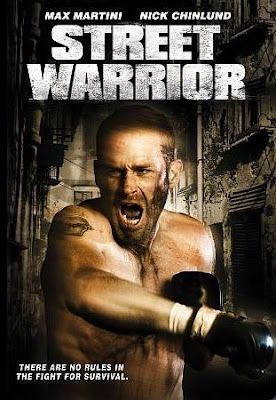 Jack Campbell (Martini) is a soldier who gets a dishonorable discharge for beating up his commanding officer. He goes back to his old stomping grounds and finds out his brother has been severely beaten by a steroid-enhanced punchfighter named Isaiah. So he infiltrates the underground fighting circuit called "The Gauntlet" in order to get answers. So after meeting a bunch of crazy characters, the evil fight promoter Pope (Chinlund) kidnaps Jack's brother's pregnant wife so Jack will keep fighting in the tournaments. Does this plot seem familiar?

The meatheads that Jack must fight include: Jersey Devil, Farm Boy, Zeke, Isaiah, and the Nazi Baldus, who, when he wins a fight does the Nazi salute AND the goose-step. The fights in the film are haphazardly edited with a bunch of quick cutting.

Chinlund as Pope looks like a cross between Barry Williams, Ray Liotta, David Hasselhoff and Ryan Seacrest. He puts in an over the top performance, screaming all his lines, including the oft-repeated "LET'S SEE... SOME BLOOD!" Max Martini mumbles all his lines and the DVD has no closed-captioning to help you out. In the obligatory bar fight scene, he beats someone up with an 8-ball from a pool table and proclaims "8 ball in the corner pocket". Another understandable line: "I'm okay with trouble".

It seems Street Warrior was made in the wrong decade. It should have been made in the late 80's/early 90's when direct-to-video punchfighting movies were king. It's good that this one comes so late in the game, but it is unclear whether we are to take it seriously or not. One minute it is serious, and the next, there are some ridiculous moments, characters and one-liners. In old-school punchfighters, you can actually see the punching. Here, there is incomprehensible, ADD-addled editing which hinders the final product.

Street Warrior is an enjoyable-enough latter-day punchfighter, but, but despite its many flaws, we are happy that they are still cranking out movies of this subgenre. We should be grateful.