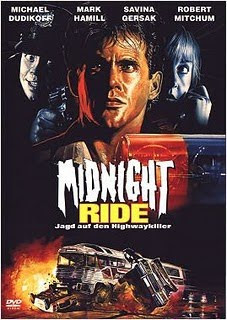 In this nonsensical tripe, Lawson Markman (The Dudester) plays a cop (and that's ALL we know about him) who splits from his wife Laura (Gersak). She picks up hitchhiker Justin McKay (Hamill) who turns out to be a raving, annoying psychopath. McKay forces her to drive to the town of Hendersonville so he can meet up with his "only friend" Dr. Hardy (Unfortunately, Robert Mitchum). In what is basically a road movie, Lawson is chasing after Justin and Laura for most of the running time. 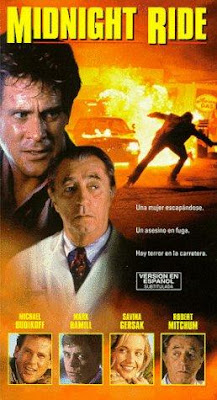 Nothing is ever established so you don't know who these characters are, and thus there is no suspense. The movie has a weird off-kilter feel and seems like it was filmed in another country but apparently it wasn't. It also feels ten years older then it is. The happy-go-lucky jazz music during the chase scenes is inappropriate. It is overlong, and rife with so many absurd plot holes, it is not possible to list them all here.

Hamill plays a very similar role to the one he played in the TV movie The City (1977), a leering lunatic who bugs out his eyes and cackles incessantly. He wears a gray-striped jacket that makes him look like a ten year old, and takes Polaroid pictures of everything. If he was trying to forget Star Wars (1977), this is not the best way to do so. Hamill spits outs craziness like "When Dr. Hardy fixes your brain, you can marry me!" 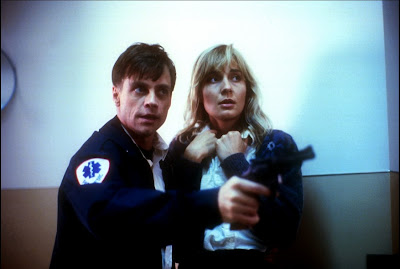 Dudikoff doesn't do any of his trademark martial arts. The movie desperately needed his patented karate chops. His cool hair is still present and accounted for however. The movie focuses way too much on Hamill and not enough on Dudikoff. Of course their final fight is in a steam factory, and Hamill has one last silly weapon up his sleeve: a random ATV. Doesn't every hospital basement have one? 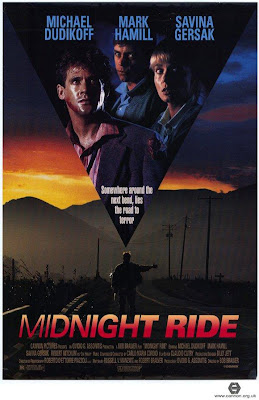 The Videohound book lists Mitchum's appearance as a cameo. In the same way that retired people get jobs because they are too freakin' bored around the house, Mitchum's decision to appear in Midnight Ride seems based on that same thought process.

It's no surprise Cannon Films ceased to exist a few years later. The glory days were over. 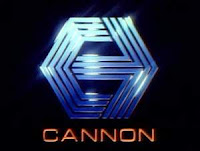 The thing that really irked me about this one, as you pointed out, was that Dudikoff not only didn't do his trademark martial arts, but he got the crap kicked out of him by a geeky-yet-psycho Mark Hamill. Why would anyone sign up to watch that?

You are absolutely right! Michael Dudikoff should be karate chopping baddies, not lamely fighting with Hamill. A big waste of time.

I personally enjoyed this film more then you did, I thought the fight with Hamill(who made for a very creepy villain BTW) was actually pretty good.

In our opinion, Hamill was really over the top. Needed more Dudikoff!