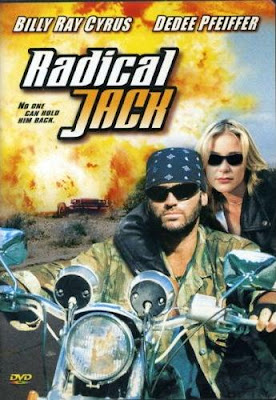 "No One Can Hold Him Back!"


What? Billy Ray Cyrus in an R-rated direct-to-video action movie named RADICAL JACK? What, was Dwight Yoakam, Randy Travis, or Brooks and/or Dunn not available? But more importantly...where do I sign up?

Jack Joseph Reynolds (Cyrus) is an MIA CIA ex-Desert Storm Navy SEAL who just wants to sit in the local bar and say "nope" over and over again after a terrorist named Riotti killed his wife during a botched mission. He is persuaded, however to go undercover as a drifter in the small town of Hope, Vermont. Obviously this place is a hotbed of gun-running. The axis of evil in the Vermont burg is a father and son team of Lloyd and Rolland Buckworth (Flower and Keanu Reeves lookalike Blake respectively), and a bunch of redneck good ol' boys who do their bidding. Due to the radical-ness of his mission, his code name is "Radical Jack", and he calls in to his superiors with the code name "Radical 177".

Reynolds gets a job at the local watering hole called the Red Moon Saloon (apparently, a real place). There he meets Kate (Pfeiffer), one of the many women in Hope who think he is the hottest hunk in town. They develop a relationship, but there's a problem. She just broke up with Rolland because of his abusive ways. He's not happy. Because Radical Jack is infringing upon his gun and missile dealings AND his woman, Rolland declares all-out war on Jack. The results are less than radical. 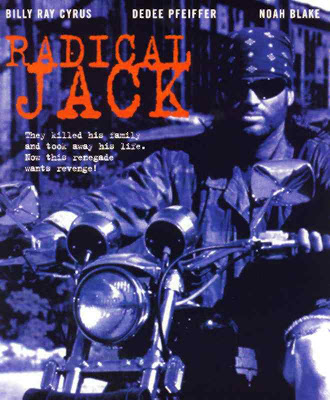 There is an attempt at seriousness here, to the film's detriment. Sadly, it has an amateurish, rock-bottom DTV look to it, both in the technical aspects and the acting. To be fair, everyone seemed to be trying hard though. The film is some kind of a knockoff of Road House (1989) and Beyond the Law (1992).

Flower as Lloyd is the least-menacing villain ever. When he says "I want the missiles", he's about as intimidating as a Wal-Mart greeter.

And what would the PAX network think of Cyrus' very un-Doc-like performance here? His mullet is mighty and it even has powers. Whenever he has a flashback, he touches his mullet, which is connected to the remembrance parts of his brain. I think I saw the title "mullet wrangler" in the end credits. Even when he wears his "recon hat" -- a special hat he uses when he spies on people, using 90's kids toy SpyTech -- his mullet does all the acting.

In one of the prerequisite barfights, we even get to see some of his patented Cyrus-Fu as takes down Rolland. There is also the standard abandoned warehouse scene, silly twists in the plot that make no sense, and a curious lack of action. There is even a counter that appears on screen from time to time reminding you, in army time, how much time has passed on his mission. The viewer despairs at how little time has actually passed. Why would the filmmakers rub that in?

When you are watching Radical Jack, at times it dawns on you that "I am WATCHING RADICAL JACK." It really makes you reassess your life and your priorities.

Surely a punishment for Miley would be to be subjected to this slop of a slog of a film. Not that that is a surprise in any way.

Have an achy-breaky good time watching this Radical crud.

I'm torn here. This looks hilarious, and I'm probably a bigger connoisseur of mullets than I am of Direct to Video. Plus, I love Deedee Pfeifer.

PS
I should note that my use of the term "connoisseur" is supposed to be ironic. I had trouible with someone who commented recently that didn't understand that, and kept referring to me as the "so-called connoisseur" in an attempted dig.

Will love to get your opinion on the movie. His mullet does a lot of the acting!

Good news! RiffTrax has just covered this turkey and coincidentally one of the co-producers is David Giancola who directed the Mystery Science Theater 3000 favorite Time Chasers as well as the Die Hard clone Icebreaker.