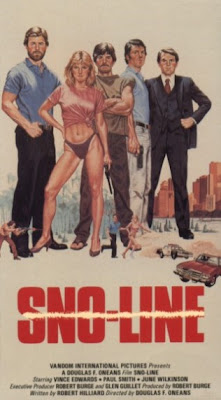 Steve King (Edwards) is a New York gangster that moves to Beaumont, Texas, figuring he can bring his street smarts to an unsuspecting criminal underworld in a different part of the country. Shortly after the movie begins, there's an on-screen title that reads: "One Year Later" for no discernible reason. He wants to build a "sno-line" from Houston to El Paso, controlling the cocaine racket. He also has a casino and there are corrupt Senators on the take.

Meanwhile a rival gang, headed by the bearded Kenny Loggins lookalike Bedford, wants to move in on the action. They have listening devices everywhere, including at the table at the country club where King hangs out. One of the members of the rival gang, Michael (Carey Clark) wants to just escape with his girlfriend with some stolen money. So it's gangsters chasing after gangsters, and Michael running away, and cops chasing them all. Who will escape?

In director O'Neons' only directorial effort, he brings us a very 80's subject. Cocaine and the people behind this drug trade. It's always fun to see Vince Edwards but the problem is this film has no heroes. You don't really root for him, Bedford or Michael to succeed. This is one of the main failings of the film. You don't really care what happens to anyone because they are all bad guys. Of course, King's assistant Gus (Louis Guss) is the most likable one, as the wisecracking old-school Italian schlub. Burt Young also could have played this role.

King hides his operation through a milk-delivery company called "King's Dairy". He delivers the coke in the milk and also collects on his gambling debts. Clever innovation. This leads to a mob war in the bayou with some good-ole-boys. King and Gus travel the back swamps in their boat named the "Fungus". A movie highlight involves Duval (Smith) and an alligator. We won't give it away.

There are some more fights, chases and double crosses, most of which the audience is indifferent towards, even though some involve King's main lady Audrey (Wilkinson). It quickly devolves into a Dukes of Hazzard episode. While the idea of a mob man dealing coke and doing mob things in Texas is pretty novel, Sno-Line lacks a certain energy and cohesiveness that would have helped considerably. We love the low-budget attitude, and all the 80's fashions alone make it watchable. Released on VHS in the U.S. on the great Lightning Video label, Sno-Line is the type of movie if you see somewhere you should pick up, but it's not necessary to go out of your way to try and find.

I have this one in my vestron collection, but never watched it.
Just don't like the USA artwork of this one; IMO the Belgian/netherlands & also the uk is nicer

In the uk this film was released on the vestron label as Deathline
http://dan-vestronvideointernational.blogspot.com/search/label/Sno-Line

Agreed that is a way better cover! Also thanks for the offer! We will definitely take you up on it.

We were executive producers..(put up money!)also got to be in the casino shots. It was fun but we lost our money!!

Thanks for dropping by the site. Would love to hear the whole story on how this got made. Sorry you lost money though. Got to ask too: How was June Wilkinson like to work with?