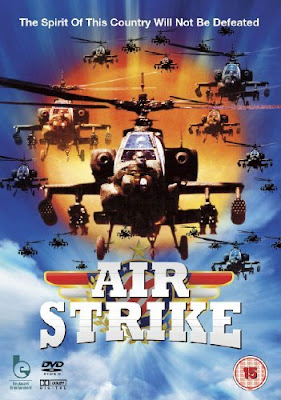 
"The Spirit Of This Country Will Not Be Defeated!"

The second-best of the "American Heroes" series (the best being Special Forces), Air Strike is a cliche-ridden mess, but it's not boring. At least not most of the time.

When evil drug lord Ivan Stefanovich (Geraskov) and his nefarious army, the Tiger Guard, start causing trouble in the Eastern European country of Petrovia, the American helicopter pilots are called in to start shooting and missile-ing everything in sight. Ben Garret (Rusler) is called out of retirement to handle the situation because apparently his brother Jack was a legendary soldier. When Charlie (Gareis) (who turns out to be a...woman *gasp!*) joins the squadron, Top Gun-style sparks fly. Just because she is General Cornelius Jones' daughter, she doesn't want any special treatment. Garret is eventually captured and tortured by the baddies, but then he rejoins his team to exact an explosive revenge.

Now, I'm all for patriotism. We probably love America more than anyone you'll ever meet, but this is just ridiculous. It's like director David Worth was given the mandate "make it patriotic", and he went so far over the top it almost seems snide. It's as if he saying "Oh, they want patriotism, I'll give 'em patriotism..." There's an American flag in almost every scene in the movie, and the characters chant "U-S-A! U-S-A!" so much it's actually embarrassing. Interestingly, if you look at the end credits, the films in the American Heroes series are not made by Americans so I wonder what they thought about all this. But then again, I suppose no one's stopping them from making their own movie about Bulgarian pride. 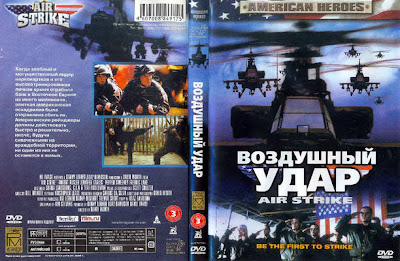 It's hard to tell what's worse: the CGI missiles and helicopters, or the fact that they were mixed with actual explosions and stunts in an attempt to fool the audience into thinking it's all seamless. And while the character of Walker (Burdick) is constantly reading Lord of the Rings, and the character of Perez (Ivo Tonchev) is simply cliche-fodder, our hats should go off to Robert Rusler as Garret. We all know (or should know) Rusler from 80's classics like personal favorite Thrashin' (1986). Even though the one-liners he says to himself are not clever in any way, shape or form, his charm and charisma almost saves Air Strike. That's paying the man a great compliment. He all but triumphs over impossible odds. He deserves a lot of credit for making the film less of a slog of CGI doom. But saying any one actor or performance could transcend, and make Air Strike a good movie is like asking someone to go up Niagara Falls in a barrel. But kudos for Rusler for almost pulling it off. 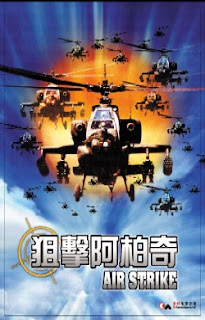 Other things worth noting are the funny, overly deep and gravelly overdubbed "bad guy voice" Ivan Stefanovich has, the TV monitor that the military brass are constantly watching that says in giant letters taped to the screen "DRONE SCREEN" (maybe the film of Air Strike was playing on it...ha!), and the fact that Garret's team in the film is called "Blue Thunder". Why would they make the audience recall in their minds a good helicopter movie, thus making the one they are currently watching seem even worse by comparison?

But the bottom line is that Air Strike has every cliche in the book and a lot of flaws, but Robert Rusler does his best.

I personally found this film very entertaining, the patriotism and CGI didn't bother me one bit.

The patriotism was good, the CGI was very poor. Without Rusler, this would've been a huge dud.