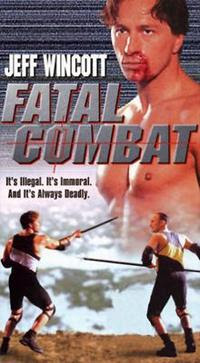 
"It's Illegal. It's Immoral. And It's Always Deadly."

Professor John Stoneman (Wincott) is a college professor who gives a lot of homework, but is a man of peace and nonviolence. He teaches his students about tolerance while hurling an unending stream of racial epithets against fellow student/friend Jason Samuels (Di Mambro). Luckily he was just playing a character to prove a point. Stoneman's wife Carmel  (St-Onge) is also a professor at the same university and pregnant with their first child. Things are looking up for the Stonemans, but suddenly Carmel is attacked in the parking garage of the hospital after getting a checkup about the baby. Gangs of punks that hang out in hospital parking lots are a menace in Canada, so John, who is also like a 200th degree black belt, dispatches them easily...but Carmel loses the baby in the process.

The story of the attack was on the news, and evil mastermind Houston Armstrong (Fitzpatrick) was watching. You see, he runs his own underground TV network which has one show - No Exit. It is a fight-to-the-death tournament where people Armstrong has kidnapped and imprisoned on his compound in the middle of nowhere fight and die on live TV. The problem is, as you might think with underground death matches, that the losers keep dying, so there is the need for fresh blood to enter the competition. So both Stoneman and Samuels are spirited away to the compound and locked up. They must fight to survive. The star fighter of No Exit is the hulking, evil brute Darcona (Thorsen). He is known for being tough, being the biggest jerk ever, and shouting "Yahhhhhhh!!!!" a lot. So will Stoneman be able to beat Armstrong, Darcona, and Armstrong's second-in-command Tayback (Douglas O'Keeffe)? 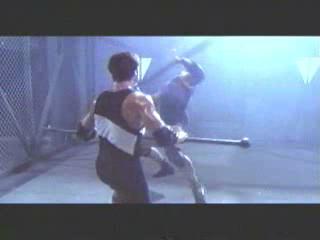 Basically an over-intellectualized punchfighter crossed with a prison movie, and as much as the filmmakers probably wanted to reference Jean-Paul Sartre's play No Exit, Fatal Combat is something of a cross between The Running Man (1987) and Death Warrant (1990). The movie suffers from a lack of originality, and the constant disjointed cuts and cutaways to a screen blasting with static as transitions between scenes make it seem like it is trying too hard to be cool.

The movie starts with a "Nooooooo!!!" and Wincott says "Nooooooo!!!!" many times throughout the film, and a few of the times, it is in slow motion, so the "NO" is a few octaves lower than it would normally be. This is more funny than serious and the filmmakers should have known that.  Fatal Combat has an unnecessarily dark and super-serious tone that we felt did not serve the film that well. For instance, after Darcona is already established as the ultimate villain, is it absolutely necessary that he rape one of the other characters? Another thing we noticed is Fatal Combat is especially gay. Not a negative criticism - just an observation. Yes, there are the normal greased-up, shirtless men grappling with each other, but the male-male rape scene and some of the other prison antics made it seem gayer than usual. Wincott has a montage training scene in tight spandex (to the catchy rock tune "No Exit" by Ken Greer, Phil Naro and Myles Hunter - no band name listed).

Sadly, because of the largely negative tone of the film, and the stylistic touches falling flat, we found we were not that invested in the final fight or the final outcome. Wincott probably relished the role of playing a professor that can also fight, and he was probably desperate to tell the world he's not your average meathead, and if the movie has a saving grace it's him. Fitzpatrick is well-cast as the evil mastermind who has a command center - and what baddie worth his salt doesn't?

Not Jeff Wincott's best - check out Last Man Standing (1996). There are plenty of flaws in Fatal Combat but punchfighter completists could do worse.

I haven't seen this one yet, but from the trailer, I can kind of see what you're saying about the dark tone. Too bad, because Wincott is the man, and every film he's in that isn't great is a waste of potential awesomeness.

Good to see another review of No Exit. I think I may have liked it more than you this time Ty. Certainly when weighed up against the purchase price of two bucks I thought it was a good little punchfighter.

DTVC: It's true that when Wincott is wasted, it is a tragedy.

Sutekh: For two bucks, it is a worthy addition to your Wincott collection. I got it for about the same amount on VHS.

Just did this one, and I agree with you and Explosive Action (Sutekh), not worth it. Not only was it too dark, but it didn't have a lot of action, and Wincott spent more time getting beat up than beating people up. As you said, he was wasted.

Fatal Combat should have been a lot better! It was definitely a waste of Wincott's talent and martial arts skill.