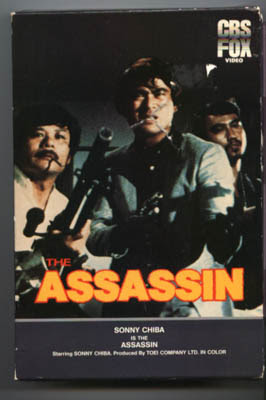 
Hayata  is an undercover cop assigned to infiltrate not one, but two rival Yakuza gangs - the Natsui Company and the Seiwa gang. Both gangs are vying for control of the typical things - drugs, territory, etc. Things get complicated when Hayata gets into a relationship with a young schoolteacher, the daughter of a fellow officer who was slain by one of the gangs. And when Hayata’s brother Ishiguro (real-life brother Jiro Chiba) becomes entangled as well, things get really crazy. Will Hayata get out of this mess?

Assassin is a typically colorful Japanese outing that throws a lot at the viewer - everything from wacky comedy, to romance, to James Bond-style heroics, to violence and even psychedelics very much of the era. For some strange reason, all these highly comic book-y antics all work in the context of this movie and the results are very enjoyable indeed.  There is a lot of technical inventiveness going on behind the camera which helps propel the movie along, and the clothing the characters wear is excellent and maintains the viewers’ interest on that alone.

Assassin is every bit as good as a movie by Seijun Suzuki, but will this film be coming out on the much-vaunted “Criterion Collection” like some of Suzuki’s movies? Not likely. This exposes the Criterion people as hypocritical snobs, as if I needed to do so.  In the 80’s, this movie came out on CBS-Fox Home Video, in a very cool medium-big box with a slide-out tape holder. This release is riddled with inaccuracies: for example, it says the movie came out in 1977 and was directed by a “Tachiichi Sakimori” - wrong on both counts - and, believe it or not, the tape goes back and forth with its dubbing (which is of course of the silly, loud and dumb variety) - some scenes are dubbed and others are not. It practically goes back and forth throughout the whole movie. It’s not done for effect, perhaps it was laziness or lack of caring? We’ll perhaps never know, but there is a region 2 DVD release of this film, let’s hope they corrected this. Also some of the credits are misspelled (“Playwritting", anybody?)

Director Yukio Noda has another movie out on US DVD called Zero Woman: Red Handcuffs (1974), which is also a crazy one and continues his love for torture sequences.  He worked with Chiba a lot, perhaps most famously on Golgo 13 (1977).

No one can take on the bad guys and look as cool and stylish as Sonny Chiba while doing it, and here is a prime example. Dripping with 70’s style, those who like Chiba (are there people out there who don’t?) will find plenty to sink their teeth into here.

Wow, throwin' down the gauntlet to the Criterion snobs, I like it. I actually have a Suzuki movie coming today, Take Aim at the Police Van, which is a part of Criterion's Eclipse Series look at Nikkatsu Noir; also, Suzuki is one of my favorite directors. If this is anywhere near the stylish noir that Suzuki is known for, I'm excited to check it out. The only Chiba I've really seen is the Street Fighter series.

Another Chiba to check out is Karate Warriors (1976).

Any Chiba is good Chiba!

Excellent write-up. Have not seen this one. Love the box art. I wish someone would have the brass balls to release obscure action/horror/exploitation flicks on DVD in the old-school clamshell boxes.

Thanks! That would be so great if they released these types of movies to dvd.

Seconded on the DVD clam shell case idea. That would be brilliant. Surely some aspiring film nerd has tried something like this before? Surely?

Another great review Ty!
I swear that guy in the front looks like Chow Yun Fat to me. lol.

Matthew Conway: I hope so! One day it might happen.

RobotGEEK: Thanks! Haha, he kind of does!

Looks good. The downside of Criterion's reign is that they make some great movies available while at the same time excluding so many great ones. It's a shame.

Karate Warriors I've heard of, so I'll definitely have to check it out. I just finished the Eclipse Nikkatsu Noir series. It took Netflix forever to get them to me, but they were worth it. I'm not sure if you're a Jo Shishido fan (Captain Joe with the puffy cheeks and a drinking problem on MST3K's Fugitive Alien), but he's in a few, and he's fantastic.

We have been meaning to check out those Nikkatsu Noir movies and get them on Netflix! Which one is your favorite?