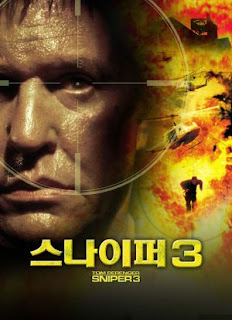 
Beckett’s back! Yay? This time around, Beckett (Berenger, of course) is summoned to back to Vietnam to kill some terrorists. He teams up with a local cop to clean up Ho Chi Minh City, but as his mission is getting underway, he realizes a former ‘Nam buddy had stayed behind and now is his nemesis. Beckett will now have to grapple with demons from his past, his current alcoholism, and a sort of culture shock to dust off his old sniping skills. Can he do it?

Okay, okay, we get it. Thomas Beckett. He’s a sniper. He’s the best. Why on God’s green earth there needs to be THREE movies to tell us this cannot possibly be explained. There’s no possible way anyone demanded another Sniper movie after the lackluster Sniper 2 (2002). Now there’s even a fourth one, but Berenger had the good sense to steer clear. But Billy Zane returns, so it’s not a total loss. However,  the movie at hand today is not Sniper: Reloaded (2010), it’s part three of the Berenger trilogy.  But the problem is, there are only so many ways you can snipe. There are only so many times you can say “One shot, one kill” before it starts to lose all meaning.

We see what they were trying to do here. They were trying to bring it back to a more dark, serious and human level after a mediocre part 2, exactly what happened with the Universal Soldier series. Part two of that was lame, but Regeneration redeemed itself by dispensing with the stupidity and going for the jugular. While Sniper 3 appears to be following that formula, the results are not the same. While we appreciated Beckett calling the city “Saigon” and reminiscing about his past, and his struggles with alcohol, somehow it’s just getting harder and harder to care. Not that there aren’t some cool moments, such as the scene at the nightclub. But if there must be a Sniper 3, they should have gone in a grittier direction and stuck with it, not just give Beckett yet another temporary partner and call it a day. But because it’s a DTV film of the 2000’s, there’s plenty of techno on the soundtrack. Due to the presence of Vietnam vet Thomas Beckett, a new genre is formed: “Beckno”. 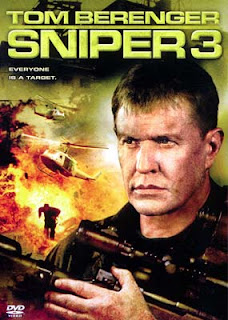 The four Sniper movies made to date have four different directors. Coincidence? Perhaps no director has come back because after they finish directing it, they feel they’ve taken a movie about sniping as far as they can and feel no need to return. Apparently that rule doesn’t apply to the viewing public. The people behind the Sniper series seem to think there’s an endless appetite for this out there. While Sniper 3 is not a bad movie by any means, it’s unnecessary on top of unnecessary. Even the presence of the great Tom Berenger can’t save it from feeling like a retread. It’s hard to get very enthusiastic about a third Sniper movie. To date, the best one remains the first one.

I'm surprised Sniper got 3 sequels myself, while I did enjoy them, I can think of plenty of other action films i'd rather have sequels to(like Bad Boys 3, come on Bay, get your ass in gear already!)

Yeah, this movie didn't really need to exist but it's okay, more exciting than part 2.

Again, not enough sniping. I loved the crazy shoot out at the end though, that was pretty sweet.

Also, I liked how they gave a little bit of the story to being about how Berenger is too old to keep up with the mission. That final shot when he goes to sleep in the helicopter was a pretty good way to wrap up the series.

Venom: It was pretty odd to see three sequels to this. Haven't seen Bad Boys 2...only the 1st one. Will have to check it out eventually.

Jack: Totally agree about the ending. It was a lot of fun. Berenger puts in his usual good performance. It helps out the movie a lot!

I've been meaning to hit the Sniper sequels myself. I think it's just something we all have to do, but I've been holding off because Sniper 2 is only on Hulu, and I don't like capturing images from them.

Definitely looking forward to your take on the Beckett trilogy. Damn Hulu.