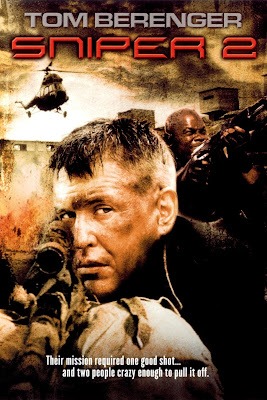 “We’re the ones that unscrew the problems the diplomats make”.


Thomas Beckett (Berenger) is called back into action because not only was he “The Best”, but he’s still “The Best” all these years later. He thought he left his sniping days behind, now that he’s taking yahoos on hunting trips. But the government offers him anything he wants to go to Serbia and assassinate Valstoria, an official who has been behind some sort of ethnic cleansing. Sensing a trick, because if the government is offering him anything, they think he won’t return alive, Beckett simply asks for a restoration of his rank. So they team up Master Gunnery Sergeant Beckett with a prisoner, Cole (Woodbine), who has a chance to earn his freedom if he backs up Beckett on this mission. But as we know, Beckett has a history of losing partners. Can they execute their mission...and their target?

It’s easy to think this installment in the Sniper series was made sometime in the 90’s, right after the first movie. It seems very 90’s. But surprisingly, it was released in 2002. Seeing as the first Sniper was released in 1993, why the filmmakers thought that fans were clamoring for a new Sniper vehicle nine years after the fact remains a mystery. And thus, Sniper 2 does have a “this never needed to be made” kind of feeling throughout. They probably thought it would be worthwhile to have Beckett talk about such things as al-Qaida and Guantanamo Bay, and say things like “Freedom isn’t free”, thus dating the proceedings to the Bush administration. By comparison, the first Sniper movie has more of a timeless feel, not dating to any one era. 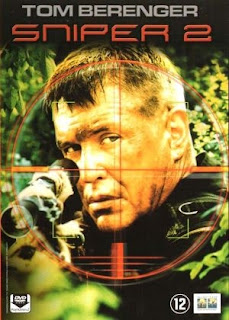 It seems like a Nu-Image movie, and it was shot in Hungary instead of Bulgaria. Not helping matters is the awful CGI, which was worse - if such a thing is possible - in 2002 than it is today. So points have to be detracted for that. Come on, that’s a betrayal of everything Master Gunnery Sergeant Thomas Beckett stands for! He shouldn’t have to tolerate CGI stupidity. It should be only the real deal for him. He has enough problems as it is (there’s some good continuity from the first movie regarding his injuries from torture he suffered). Woodbine, as the backup this time around, makes a worthy foil for Beckett, and he has a very distinctive voice. He should really do voice-overs and cartoons and such. His voice carries his performance here. 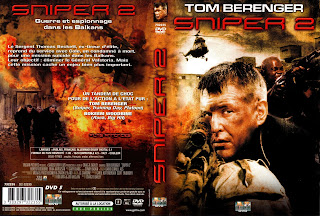 Director Baxley, who we’re normally a fan of, because of Action Jackson (1988), I Come In Peace (1990) and Stone Cold (1991), seems to be taking kind of a paycheck assignment here. He’s a competent director, and that shows, but he should have brought the same verve he brought to the aforementioned three movies to this one. He should have made Beckett be able to stand alongside Jackson , Jack Caine, and John Stone as some of his more memorable men of action. Berenger does do his normal high-quality job, but something seems to be missing.

As it stands, Sniper 2 is okay. For a movie that doesn’t need to exist, it’s decent. It’s not offensively bad, it’s just a bit dull and unnecessary. It’s good that it isn’t jokey, and we appreciate that, but there’s no need to run out and see this.

Yeah, this one was only so-so. Probably my least favourite of the series. Woodbine is nowhere near as interesting a character as Zane.

Also, I thought there wasn't nearly enough sniping apart from the final battle. They needed to have a shoot out with multiple attackers.

Definitely agree with your comment. This was pretty mediocre and it needed more sniper action...thankfully the 3rd one is a little better than this.

that's unfortunate. I dig Tom Berenger, and I loved the original. I thought they cut off his trigger finger in part one, so it would be interesting to see how he copes.

Tom Berenger put in his usual good performance, but the movie was pretty weak.

They do mention the finger a few times, but then no one mentions it when he starts shooting people again. Haha.

Although I agree with your review, I re-watched this last year, and found it to have pretty good production values, and a semi-decent budget...compared to some of the more recent STV releases. When i first watched the movie, I found it to be a bit plodding, but it's funny how 'high-end' a lot of DTV releases were, about 10 years or so, ago?

I've had quite a few requests for and sold quite a few dvd's of this movie on my market stall, also (so i guess *someone* likes this)

We think it is very interesting that you run a market stall. We did not know that. People request Sniper 2? Seems like an odd choice. What else do people request?

Because of the age group of my customers (40 upwards) the guys usually like war themed movies. I also sell loads of Seagal movies week in, week out (all the older woman tell me they've still got the hots for the 'Stout Sensei')

John Wayne, Jason Vorhees, or just plain old DTV action flicks also sell very well. I have a few customers who like serious movies, but not that many. I have one customer in particular, who loves bad movies, after i recommended (and sold) him CITY DRAGON. Since then, he's requested plenty of PM/Nu Image.
I've had my stall since 2009, and it carries around 700-800 dvds (with the occasional Blu-Ray)

Very cool. You have a great selection! Haha, gotta love The Stout Sensei...he is always good for a laugh or two.

I know I'm going to probably get blasted here for saying this but I'd say this is my favorite action filmed by Craig R. Baxley followed by Predator, Action Jackson and Aces N' Eight. He truly knows how to get a decent build-up to some splendid combat-filled finales.

Despite many noting that there's not as much momentum for the character and the language/scenery not feeling authentic, the premise just has a straightforward mechanism that I appreciate. I don't know what CGI you guys are talking about as all of the explosions appear authentic although there's some questionable slow motion at the end that seems dirt-cheap (like something you'd encounter on Walker, Texas Ranger not a Bulgaria-Nu Image Films type production.

Overall, I would label Thomas Beckett as the most underrated badass movie/TV show character. In fact, I love it when I see movie forums list him up there alongside Jason Bourne, Ethan Hunt, 007, Agent Gibbs (NCIS), Jonas Blane (The Unit), Jack Bauer (24), John McClane, Bryan Mills (Taken), Mike Banning (Olympus Has Fallen) or even your typical Arnold Schwarzenegger/Dolph Lundgren character.

Totally agree about Thomas Beckett being underrated. Tom Berenger is always solid. Did you ever watch the short-lived show Peacemakers? He played a sheriff who solves crimes in the old west. Its on Hulu Plus.

Still need to see that show

If you like CSI or Law and Order, its a decent watch.

Tom Berenger is sort of both an underused action star AND Western star when you think about it hard.