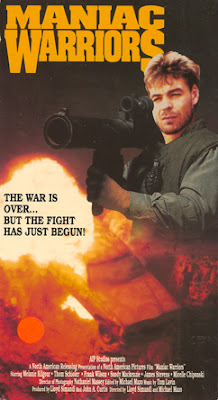 AKA: Empire Of Ash

Directed by: Michael Mazo and Lloyd A. Simandl

In a post-apocalyptic future, cities have been destroyed so the survivors roam the remaining forests. An aggressive, traveling gang of “maniac warriors”, named LARD, which stands for, what else, Leukocytes Acquisitors for Remission of Disease, go around terrorizing and killing people. Who they don’t kill, they kidnap and steal their blood so they can continue to survive. Naturally they are led by an insane, shroud-wearing preacher, and when they kidnap the wrong girl, her sister and a defector from LARD who is now a good guy team up to try and rescue her. Who will prevail - the survivors pure of blood or the MANIAC WARRIORS?

While this movie is set in the fictional town of New Idaho, it was in fact shot in Canada. It’s your standard Road Warrior/Mad Max knockoff, but presumably they thought by shooting the film in the forest, viewers wouldn’t make the connection. Naturally, AIP picked it up and released it in the U.S. Confusingly, this very film is also known as Empire of Ash 2 (the original title is Empire of Ash). This must mark the first time in movie history that a movie and its sequel are THE SAME MOVIE. Well that saves time. There is one sequel, titled Last of the Warriors (1990). (That movie is known as Empire of Ash 3, for those that are still keeping track). 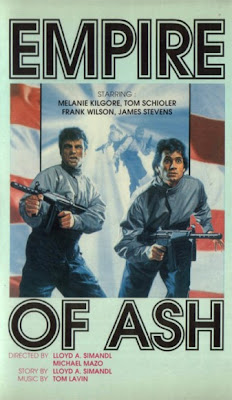 There is some interesting camerawork and notable stunts, especially considering its restrictive low-budget status, but the fact remains that this is a middle-of-the-road outing at best, and it doesn’t even have the power of a Ron Marchini to keep it afloat. Just think about that. Try to imagine a Ron Marchini movie without Ron Marchini. What’s left?

But you have to love some of the outfits and vehicles - you know it’s a post-nuclear future because the main villainess has crimped hair. And, sensing that there isn’t enough plot to sustain 90 minutes, the film veers into the story of two survivalists (potentially named Cochran and McKenzie, but we’re not sure). They play Gunsmoke and Ikari Warriors on a post-apocalyptic Nintendo so we guess you have to care about their plight. Additionally, there’s some reasonably rockin’ music, including a cover of “Born to be Wild”, and an original tune by one John Wednesday entitled “Gonna Get Some”, but let’s face it, he’s no Billy Butt.

Last but not least, we would be remiss if we didn’t mention that this movie has a rocket launcher hat. Apropos of absolutely nothing, a character comes on screen with this contraption on his head, blows up a barn with a projectile launched from his fisherman’s hat, and walks away. Why it’s easier, much less cooler, to shoot a missile from your headgear remains unexplained. Besides the obvious question of WHY??????, we commend the use of the rocket launcher hat. It was a welcome invention in this dire world. Sure, one year earlier Heather Thomas sported some wicked-awesome helmet lasers in Cyclone (1987), but this bit of utter wackiness remains a movie highlight here.

For that rock-bottom budget, AIP style, this movie delivers it in spades. It features some other weird scenes (we won’t spoil them) - but the movie as a whole isn’t weird enough to quite warrant full cult status. If you find this style too much to take, stay away.

The LARDs are *not* the "maniac warriors" who look like a mix-up of Village People background dancers and Soviet Russian goat herders who once heard about Mad Max from a drunkard.

The LARDs are the guys in the yellow cloaks, welding goggles and masks.

Thanks for the correction! It was all very confusing and it was hard to tell who is who in a post-apocalyptic wasteland.

I much prefer Empire of Ash as a title. They could have really have had some fun with that in further sequels. Just think about it! "EMPIRE OF ASHES 2 ASHES" See what I did there?

Haha, that is a killer sequel title!

I just got this movie(original dvd) from a friend ...Imso gonna watch that...

Nice! You are going to really like it. It is a lot of fun.