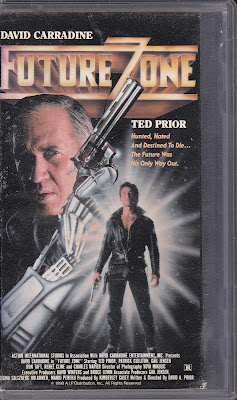 John Tucker (Carradine) is back in this sequel to Future Force (1989). This time around, Tucker is having some marital problems with wife Marion (real-life wife at this time Gail Jensen). Also he’s fighting gangsters and corruption - and what does Mickland (Napier) have to do with all this? While Tucker is busy being an old west-style gunslinger in a world gone mad, a mysterious stranger seemingly appears out of nowhere to come back him up. But this “stranger” is none other than Billy Tucker (Prior), John’s son who travels back in time to help his dad. Naturally, they don’t get along at first...well, you know the drill by this point. Will the father and son Tucker team prove that family wins out in the end?

Another question you could ask is, “WHY is there another Tucker?” This movie is really pushing its luck. By that we mean, there was no reason whatsoever for a sequel to Future Force. If David Prior wanted to put Carradine, Napier and Ted in a movie, fine, so much the better, but it really did not need to be another John Tucker vehicle. I doubt fans were clamoring for that. It’s almost wasteful, it could have been a whole new idea. So as it stands, Future Zone is very, very dumb, and with an odd, seemingly too-slow pace to boot. On the bright side, Tucker’s proto-Power Glove is back in force, shooting blue lasers and blowing up helicopters, and there are plenty of blow-ups, but the pace, overall stupidity and one other negative aspect sink the movie... 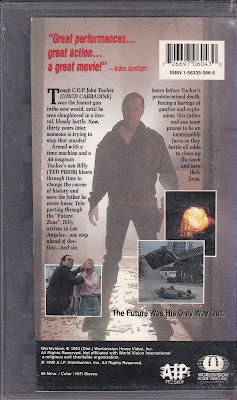 While Ted Prior’s shirt is surely a sight to behold, as is Carradine’s jacket with the hand emblazoned on the back, and Carradine gets a great entrance, it’s, sadly, not enough. This is not David Prior at his best and he should have stopped after the first “Future” movie and made a new project here. Future Zone is a disappointment.

Comeuppance Review by: Brett and Ty
Posted by Ty at 4.4.12

Disagree with you on this one, thought it was decent enough, carradine seemed fine ot me, he didn't look like he had contempt for this film, and I liked how this film mized in western aspects, and the action scenes were well done enough, but I will agree with you that the score is pretty awful.

The score is one of the worst parts...i wonder why it was so goofy? It made no sense. To us, Carradine looked really bored! Lol.

The music sort of reminded me of the score from Exterminator 2, which was equally bizarre sounding. Carradine was in some pretty bad films which make this one look like high art by comparison,(I.E. Fall Down Dead, Night Rhythms) but the worst film he's ever done has got to be Midnight Fear, a deadly dull serial killer film, Carradine looks drunk half the time(fitting since his character is an alcoholic) and completely bored for the other half.

Will definitely avoid those Carradine flicks! Thanks for the warning.

Yikes! Will avoid at all costs! lol. Great review though!

Thanks! It is definitely one to avoid. Future Force is a little better. The best part of both movies is the flying glove.

Lol! It is one of the funniest parts of the movie. Plus it shoots lasers!

I didn't think Carradine looked bored at all in this. Actually, I thought it was quite the opposite. It looked like he was having a lot of fun and knew how ridiculous the material was! Much more entertaining than "Future Force" which had almost no connection to this one.

All both movies needed is more laser-shooting glove action!