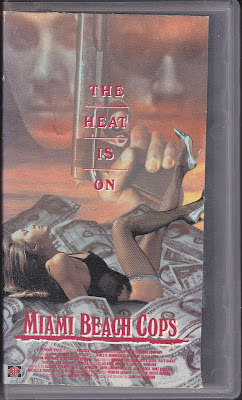 Operation Desert Storm veterans and good buddies Jeff Rodgers (Rendino) and Michael Breem (Maldonatti) return home to Osceola County, Florida and become Sheriff’s Deputies. But what they weren’t expecting was a new war at home. At least according to the opening on-screen crawl. When at first it seems they’re chasing local hoods Hank and Ben Lowmiller (Raff Barker and Dan Preston, respectively), it gradually leads to a conspiracy that goes all the way to the top. Just when Rodgers and Breem were getting used to their post-war routine, it seems life isn’t all freeze-frame high-fives for these guys...

Miami Beach Cops has a lot of homemade charm. Sure, it’s filled with non-actors and has a fairly amateurish feel, but that’s pretty common for these regional outings. Since AIP was good enough to release it on VHS, it didn’t stay regional for long. It gives a nice attempt at realism, presumably because TV shows like Cops and Rescue 911 were very popular at the time. Because Rendino and Maldonatti were not experienced actors, they mumble many of their lines and don’t project their voices well. And because music is blasting over many scenes, it’s hard to hear what they’re saying. But the music by Jerry A. Ranger and John DeVries is upbeat, cheery and at times pretty rockin’. (of course, much of it has the trademark sax so prevalent at the time). So it’s not the music’s fault, it’s just that the sound was mixed badly. 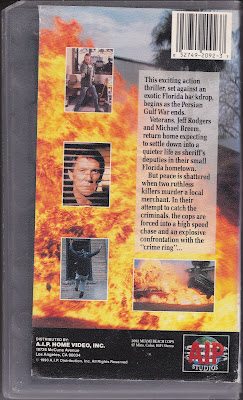 It’s hard to tell where Rendino and Maldonatti stop and Rodgers and Breem start. They clearly have good rapport - they even have their own catchphrase, “Doink”. Perhaps they were fans of the wrestling clown, but whenever something favorable happens in their lives, they do this sort of proto-fist bump thing and say, knowingly with smiles on their faces, “Doink”. Don’t you do that with your friends? And, even though they exercise alone together shirtless, they prove to each other they’re not gay by hitting the local watering hole to show off their awesome dance moves. And it’s hard not to, as there’s a hot country band who play with a Confederate flag behind them. The name of the bar is - we kid you not - The Cracker House.  This extended “picking up chicks” scene is amusing but goes on way too long  and emphasizes some pacing problems novice filmmakers often have. But it’s no big deal, and surely The Cracker House appreciates the publicity.

We think director James Winburn, an accomplished stuntman, might have been aiming for a potential TV sale here, because there is no nudity, extreme violence or even a word of profanity. But our two leads do make a lot of funny noises during the chase scenes. There are plenty of “Whooaaaaaa”s and “Wheeeeee”s. Winburn also employs every editing trick he can, such as video footage of Desert Storm, freeze frames, solarization effects, and the time-honored TV trick of recapping the best scenes during the end credits. But Miami Beach Cops does have one of the best opening sequences we’ve seen in a while, showing that with a pure drive to make a movie, even if you have a low budget, you can still draw in your audience.

The title Miami Beach Cops sounds a bit more glamorous than what’s on show - this film mainly takes place in the rural areas and swamps of Florida. That’s still a good backdrop for a movie, so perhaps they thought they needed to glitz it up to sell the movie. But forget Crockett and Tubbs and their Miami Vice, the true heroes are Rodgers and Breem because they’re the MIAMI BEACH COPS!

For a second I thought you were reviewing the Richard Roundtree film "Miami Cops"(which was pretty good BTW) but this one sounds fun too.

Miami Cops is decent, and we have actually reviewed that about a year ago.

Miami Beach Cops is not bad too...lots of low-budget fun.

I love the title! Miami Beach Cops, it just says it all. Great review! This one sounds like fun!

Thanks, buddy! It is silly AIP fun!

This kind of feels like what I came for when I pick up an AIP flick, not amazing, but as you said, lots of low-budget fun.