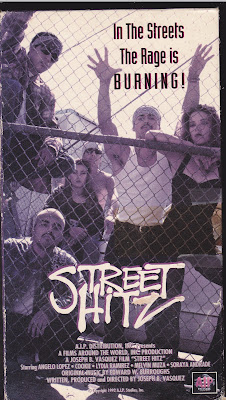 Directed by: Joseph B. Vasquez


On the tough streets of New York City’s South Bronx, Junior (Lopez) is a well-known and well-respected man in the community. For this reason, local gangster Dino (Cacioppo) is trying to recruit him into his mob family. Junior is conflicted because he wants to do the right thing in life, but he also wants and needs the money this job would offer. But Dino is even extorting protection money from Junior’s own father. Meanwhile, Junior’s brother Joey has a bright future because he is going to college and wants to study hard and get into law school. When Joey’s wife of four months becomes pregnant, Joey wants to stop the track he’s on. This angers Junior, which sets off a chain of events which will alter the lives of the brothers forever. What will be the outcome of the tale of Junior and Joey?

This is one of those low-budget movies where you can practically see the “blood sweat and tears” that must have gone into finishing this labor of love. There is plenty of realism - perhaps even a large dose of unintended realism - because of the non-actors and super-gritty atmosphere. It even becomes like a grainy documentary at times. But despite some of the standard pitfalls of independent filmmaking like some stiff and stilted acting from some inexperienced performers (which is more than understandable), and maybe a few bits of incoherence or technical issues, Street Hitz is better than you might think it is. 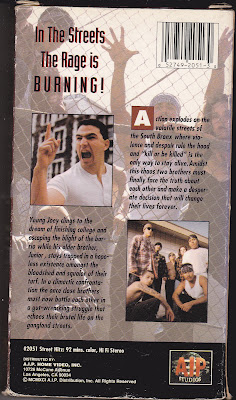 AIP marketed the film has part of the burgeoning “homie movie” trend, but that’s not really what this is at all. It’s definitely commendable that AIP put this out in the first place, so we have to give credit where credit is due, but Street Hitz is a bit like a Hispanic alternative to Straight Outta Brooklyn (1991) with an even lower budget. It was attempting a serious comment on society. The two brothers represent different philosophies about rising above your current circumstances. It even gets existential in a scene where Junior waxes philosophical about the nature of life. But it never abandons its street-level attitude, even if there is some strange dialogue about eating chicken every night. A perhaps insulting comparison would be if you imagined a more serious-minded City Dragon (1995) without the rapping. But the intentions behind that and this are miles apart, so that’s pretty unfair.

Street Hitz is actually trying - even striving - to be a quality and relevant movie, but it seems against all odds. Before overlooking this movie because of its title or box art, it might be worth giving it a chance. And, of course, Cookie is in it.