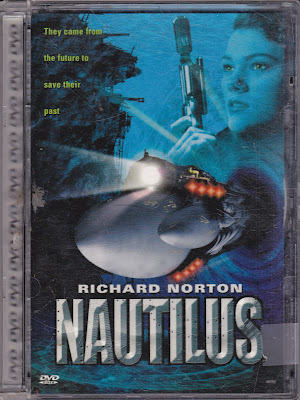 
When a big new drilling station named Prometheus is set to open out in the middle of the ocean, its main developer, Basim (Eschbach) hires Jack Harris (Norton) to be its head of security. This is needed because an eco-terrorist group named Equinox is threatening violent tactics to shut it down because they believe it’s not environmentally friendly. Just as Harris is dealing with these troublemakers, they get a message from the future in the form of a Star Wars-like hologram. Captain Brin (Kriesa) and his daughter Ariel (Wolfe) are planning to travel back in time on their submarine, the Nautilus, to stop the drilling station. They believe it will start a chain of events that will lead to catastrophic destruction and basically the end of the world. The developers, along with Harris, are skeptical, but the future-people are insistent. What then follows is a battle of wills and ideologies. Who will prevail?

We can give you the bottom line on this one right away: the scenes with Richard Norton are worthwhile and entertaining. The scenes he does not appear in are boring and reach sloggish proportions. We could just end the review there, but we’ll provide a few more of our humble thoughts. While Nautilus is not fast-paced, and is fairly typical of the DTV dreck that cluttered up the 2000’s, it actually wasn’t quite as bad as we were expecting it to be. We thought is was going to be an out-and-out sub slog, and were pleasantly surprised to find out there are some other elements mixed in. 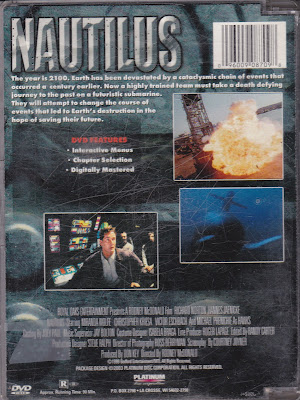 For example, the opening of the movie is decent, especially the introduction to Harris, Norton’s character. The movie has a few mildly interesting ideas, but sadly not enough to propel a 90 minute feature along like the cinematic sub that it is. As usual for the B-movies of this time, there are plenty of actors that look like bigger names (but aren’t), such as Brin, who looks like Sam Neill. There are scenes of actors calling out coordinates, which always make for thrilling viewing, and a nice dose of environmentalist claptrap along the way. And don’t forget the awkwardly-placed stock footage. But Richard Norton is charming as ever, and he singlehandedly keeps this movie from being a total flop. Take him out of the equation, and this movie would be unwatchably horrid. We do, however, give it credit for having the ORIGINAL Prometheus (2012).

Another name in the cast besides Norton would have helped...Don Swayze, Robert Davi, Matthias Hues, somebody. At least in his previous movie, Surface to Air (1998), director McDonald had Michael Madsen and Chad McQueen. Here, it’s just Norton. But the power of Norton keeps the movie afloat. Get it? Afloat? Meh, just don’t see it. (Unless you’re a really big Norton fan).

I thought the sci-fi element to this film was pretty interesting, Norton was also pretty good in Road House 2.

BTW, when is your review for Diplomatic Immunity coming?

Norton is always likable thankfully...to answer your question, we do have themes coming up in January (Lorenzo Lamas) and Feburary (Fred Williamson)...but not March...we will make sure to post it then.