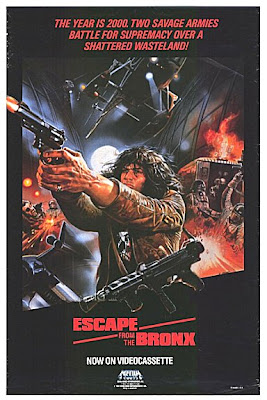 In 1990, the future, street gangs have taken over the Bronx, and it is officially designated “No Man’s Land”. A lone hero, Trash (Gregory) is a member of the Riders gang . He wants to protect his girlfriend Ann (Goodwin) from the onslaught of violence and lawlessness, but she’s the daughter of the President of The Manhattan Corporation, the suits who are really running things from behind the scenes. Part of Trash’s quest is to get to Ogre (Williamson), a powerful man in the underground community. In order to do this, Trash and his compatriots must fight through a dizzying array of enemies. Meanwhile, Hammer (Morrow) and Hot Dog (Connelly) are monitoring the situation. If that all sounds confusing, don’t worry, as 1990 is a year that can’t come too soon!

Ah, 1990: The Bronx Warriors. A video store classic if there ever was one! Just starting from the opening credits, you know what you’re about to see is going to be an absolute treat. The Walter Rizzati music is pitch-perfect, the outfits are amazing, the vehicles are a joy to watch , and the weaponry is filled with eye-catching innovation. It’s yet more proof, as if any was needed, that the 80’s rule! 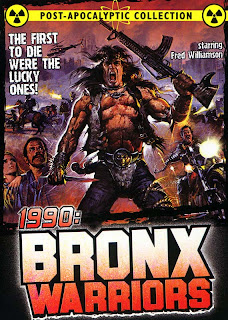 We’ve always been fans of Enzo G. Castellari, and here he puts his stylish directorial touches (as well as a role in the movie) towards the time-honored post-apocalyptic movie. In more recent years, this has come to be synonymous with “slog”, but here, that couldn’t be further from the truth. Pretty much using The Warriors (1979) and Escape From New York (1981) as its template, the filmmakers behind 1990 somehow managed to come up with their own unique beast. The Italians really have their own style, and here they put their energies to an extremely entertaining use.

Trash is truly a hero for the 80’s. First off, his name is Trash. Are you really going to argue with him? Well, there’s really no second part to that. Adding to the nostalgia factor, there are plenty of scenes that feature the World Trade Center towers. But 1990 offers something new even there: how often do you see a dude playing the drums right out in the open in front of the towers? And later on, there’s even a New York cake with the towers on it! The “icing on the cake” (sorry) is that this falls into another category we love: movies that take place in the future but are now the past. 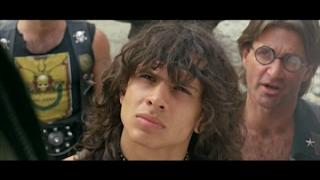 We really enjoyed 1990 and we’re pretty confident you will too. The Media Blasters DVD looks great, and needless to say, blows away the old Media tape, quality wise. It’s hard not to love 1990.

Also check out a review by our friend, the DTVC!

Agree, this is a highly enjoyable entry in the Italian-rip-off sub genre. Mark Gregory is hilariously one note and you've got to love those Warriors inspired outfits.

Favourite bit is definitely where the Bronx Warriors throw the ashes of their comrade in the river and the wind blows it back in their faces!

Definitely check out the sequel if you haven't already!

Mark Gregory is awesome! Will have to check out the sequel.

Yeah, the sequel is pretty fun. Extermination squads are sent in to destroy the Bronx and Trash has to fight back to protect his people.

Mark Gregory is also in a trilogy of First Blood/Billy Jack rip-offs called Thunder Warrior. I just managed to pick up a bootleg boxset of all three. I'll be reviewing them soon.

Nice! Looking forward to your write-ups! We have those coming down the pike too.

What a great movie this is! It's one of those movies where you can never watch other movies the same once you've seen it. Could you ever go back to watching mainstream movies like, say, Tootsie, after laying your eyes on the magnitude of The Bronx Warriors? No, I didn't think so. Try to find the sequel's Dutch DVD, because it is in glorious widescreen. The sequel isn't as good as the first one, but still a great movie. BTW, Whatever happened to Mark Gregory?

Can't agree more...its hard to watch mainstream stuff after you watch movies like this...B-movies have more fun...especially the PM flicks from the 90s.

Mark Gregory should make a comeback.

Got on VHS "Warbus 2" and "Delta Force commando" and Thunder 1-3 and the his two Bronx-Movies.

Nice haul. That is great that you are a fellow Mark Gregory fan.

This and Bronx Warriors 2 were the films which propelled me into the world of Z grade action films. The sequel is slightly superior in my opinion, but these are in the upper hierarchy of all time greats. Plus Part 2 had Henry Silva, a legend in anyone's circles!!

You're not alone - Italian post-apocalyptic movies helped a lot of people get into more interesting, under-the-radar fare. And for good reason: they were well-made, interesting and entertaining, and were easily found in many video stores. These two things allowed people to explore a world of films that they might not normally have known. Or, in other words, they're a gateway drug!

I can't decide which film I like better, this one or the sequel. I got Thunder Warrior 2 in a trade with Mitch, so i'll be seeing that ASAP.

Cool! Thunder Warrior II is pretty good. Definitely want to see the other ones eventually.

love enzo's stuff, but still have yet to see this one. Keoma is my personal fave of his so far.

In my opinion, the first Thunder Warrior is absolutely brilliant, the second one is a step down, and the third one is forgettable. For really obscure Mark Gregory fare, try to find the North Korean-Italian action epic Ten Zan, starring Frank Zagarino. Gregory plays the villain. Ten Zan was brought to you by the Great Leader Kim Il Sung, so you're obliged to like it or there will be ramifications. LOL

MarkusWelby1: Agreed. Keoma is a classic. Enzo usually does no wrong...we have a feeling you will like this.

Roger: LOL! We will like Ten Zan!...don't want to be punished by Kim Il Sung. That is cool Zags is in it too. Will have to track down a copy.