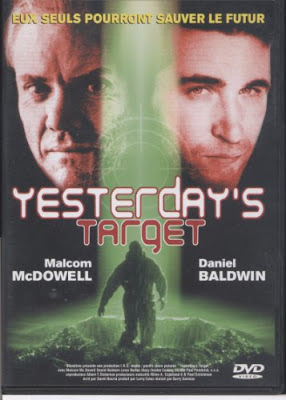 
Paul Harper (Baldwin) has telekinesis. Jessica Harper (Haiduk) can see into the future. And Carter (Carter) has flame-throwing abilities. These three unlikely allies are on the run from Winstrom (Burton) and his boss Holden (McDowell). It seems Winstrom also has special powers and is after them. Also they can travel through time and are all in our present day. It’s never made completely clear why any of this is happening. Who will become Yesterday’s Target?

If you look up the phrase “video store shelf-filler” in the dictionary, there just might be a picture of Yesterday’s Target. Also you have a pretty awesome dictionary. It’s an out-and-out sci-fi slog, but the filmmakers might have figured that if they get a good cast and make sure it’s 79 minutes long, viewers could tolerate anything. Well, this movie proves them wrong. The short running time, which we normally approve of (usually for action movies) seems too truncated to support a science fiction film with some complex ideas. It’s choppiness would indicate that there’s plenty left on the cutting room floor.

As for the cast, clearly LeVar Burton was trying to shed his “Reading Rainbow” image by playing the baddie (not entirely convincingly) both here and in his episode of “Deadly Games” on TV at the time. He has an evil hat that makes him look like a sinister Herman Cain. Presumably that’s all you can do to make LeVar look eVil. Malcolm McDowell does almost nothing, although in one scene there is a poster for A Clockwork Orange (1971). You can practically see director Barry Samson snickering to himself about how clever and “meta” he is. Actually, you can imagine him doing that throughout the course of this turkey.  Daniel Baldwin puts forth a modicum of effort, as do Haiduk, Carter and Herd, but you can’t really blame them for not bringing their A-game to this dud. Interestingly, Baldwin calls a character “Sparky”. In Desert Thunder (1999) he calls someone “Slappy”. Is Baldwin ad libbing this stuff? If so, are these the only ad libs he can come up with? Does he call people “Sparky” and “Slappy” in real life? What would you do if Daniel Baldwin called you one of these names? These are the true mysteries of Yesterday’s Target. 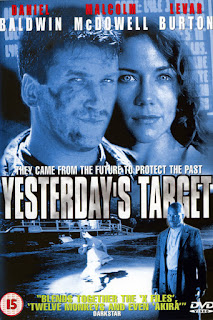 Special mention should go to Trevor Goddard, who we are fans of. Even his screen presence can’t save things. Yesterday’s Target is the type of movie that would be played on the Sci-Fi channel before they became “SyFy” and got into the whole phase of movies about dinosharks, dinocrocs, sharktopuses, sharktopiranhas, giraffehippobirds, slothtoadchickens or whatever else these geniuses deem as top-shelf Science Fiction. Asimov, Heinlein and Clarke would surely be proud. But as far as Y'sT, at least there’s no CGI to screw things up even further. Adding to the annoyance is that all the characters are continually arguing, and there’s little-to-no character development, so you really don’t care about their plight.

Yesterday’s Target is pretty darn bad. Despite the cast, you’ll want to avoid this one.

Oh well, I thought I remembered this being a decent movie...but you don't have to take my word for it...
http://youtu.be/JjuzxiuIbjs

Venom: True, Burton was good as the baddie but this was a typical sci-fi slog of the day.

Anto: Hey Anto! Da-Nun-Dunt! Greatest music sting ever. America would never know when the segments were over without it.

The cast would keep me away from this one, too.

If only they were in a better movie, maybe a fun action shoot 'em up not a sci-fi. It would be cool to see Levar Burton mowing down people.