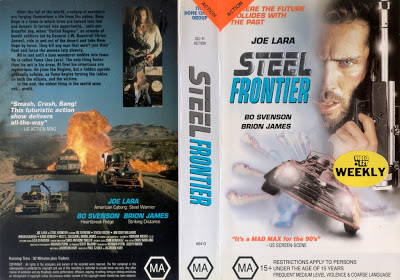 In a post-apocalyptic future, survivors live in a dirty makeshift town named New Hope. It seems tires are valuable so workers toil away in the tire yards. One day, a band of marauders known as “The Deathriders” roll into town. Through violent tactics, they sack the town of New Hope and institute J.W. Quantrell (James) as leader. Quantrell then makes his son, Julius (Victor) Mayor. Their plan is to institute what they call the “United Regime”. But a savior arrives in the form of a gunfighter named Yuma (Lara).

He pits various factions against each other (not forgetting about Bo Svenson as Ackett, Kane Hodder as Kinton and Brian Huckeba as the immortal and show-stealing “Chickenboy”). Yuma attempts to save the lives of Sarah (Foster) and her young son as she is a widow trying to make it in this tough world. But there are many pitfalls along the way, not the least of which are desert-dwelling cannibals named “Roach Eaters”. Will Yuma save the day and ride off into the sunset?

Like in the Italian post-ap’s, cars have wacky contraptions glued to them and people wear wacky outfits. But because this is a PM, it has much more action than the usual slog. There’s pretty much non-stop shooting, chases, stunts, fights and blow-ups. There’s even minimal dialogue at the outset of the movie, telling the story mainly visually, which is difficult to do. But this is a PM synthesis of Yojimbo (1961), hence For A Fistful of Dollars (1964) and For A Few Dollars More (1965) (and any number of Clint Eastwood’s 60’s/70’s output - including a bus chase reminiscent of The Gauntlet, 1977) along with a futuristic twist. So you get what’s going on here. 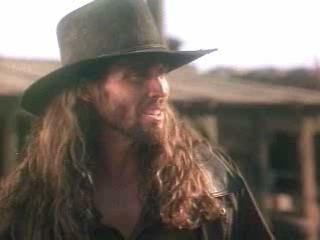 Even the name “Steel Frontier” indicates what you’re in for: “Steel” indicating the future and “Frontier” indicating the Western. There’s also some biblical symbolism worked into the storyline, a lot of which revolves around Joe Lara looking especially like Jesus this time around. He puts in an especially charming performance - this really is Lara at his absolute best. A location in the movie is even reminiscent of fellow Lara vehicle American Cyborg: Steel Warrior (1993). Maybe he lives in that industrial wasteland for real. You know Kane Hodder because he wears a hat with a Jason logo on it, and the guy who plays Julius has orange hair, making him, naturally, “Orange Julius”. Svenson puts in a standard performance. Brion James should have been more involved.

Because there is terminology such as “The Drylands” and the tire farmers are derisively known as “tire suckers”, this would seem to be PM’s Neon City (1991). But Steel Frontier is far better than that movie.

To see PM’s take on not one, but two classic genres together in one film, don’t hesitate to see Steel Frontier. And did we mention Chickenboy?

Joe Lara is always worth watching.

Can't agree more. Also Hologram Man is one of his best films.

This is one of my favorite PM movies along with Rage and Last Man Standing. Great atmosphere, and many familiar faces in the cast. Lara is at his best, too. Lara is apparently a country singer nowadays. I wish he could get back into the movies.

He looks like a country singer in Steel Frontier...foreshadowing? He should make a return to action movies. It's not too late.

As Brian Huckeba, the immortal and show-stealing “Chickenboy” himself, I thank you for this great review and generous mentions of my character. Glad you liked it. It was a blast to make. I was always hoping they did a sequel where Chickenboy wasn't dead, becomes smarter, and seeks revenge for his buddies! "Steel Frontier 2: The Wrath of Chickenboy. Time for some crowdfunding LOL!

Thanks for reading! We love your sense of humor about Chickenboy, your sequel suggestion is fantastic. It's a movie we would totally watch buddy!

This will sound crazy, but did you have or do you remember a website dedicated to post apocalyptic movies from the UK called post-apocalypse? The URL was http://www.post-apocalypse.co.uk/ but has since been closed down and is now something completely different. The guy that ran it reminds of you guys. He did a movie review of Steel Frontier and I gave him a full interview of what it was like working on the set of the film. Too bad it's not around anymore. I think you would have dug it!

That website does sound familiar, pretty sure we perused it back in the day.

If you want to share some stories or memories of your experience working on Steel Frontier, we would to love to hear them. Feel free to share right here in the comments or if you want to email me about them (whatever is more convenient for you): Tarbosh777@gmail.com