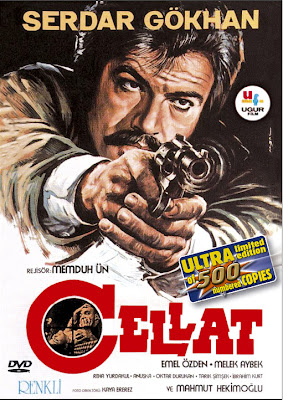 
Orhan Polat (Gokhan) is a mild-mannered architect who enjoys his relatively posh, safe life. He loves his wife Filiz, and they both spend a lot of time with Sevgi, Orhan’s sister, and her husband Jahit. But as Orhan’s co-workers ominously discuss, crime is on the rise in Istanbul where they live. When Orhan’s family is personally attacked by a trio of pot-smoking scumbags, he takes the law into his own hands - where it belongs. Soon he’s going out on the streets looking to clean things up his own way. His methods of “shoot first and escape into the night” are so effective, police Commissioner Nejati forms his own task force to try and stop the vigilante, in an attempt to prove the old methods of police work are still relevant. With a score to settle, and with bad guys as well as cops hot on his trail, will Orhan complete his mission before it’s too late?

It’s not every day you get a chance to see a movie like Cellat. At least not here in the USA. So we’re grateful to Onar films who released this gem on DVD in a hand-numbered, limited edition. Apparently there is something wacky with the copyright laws in Turkey, because they’re allowed to make “Turkish versions of...” pretty much anything they want and get away with it. Probably the most famous ones are the Turkish Star Wars (1977), Star Trek (1979) and Spider Man. Cellat is known as the Turkish Death Wish and it follows the storyline fairly closely. But the things that make it special aren’t the similarities, they’re the local differences.

Starting with the opening title cards, which are uniquely artistic in their own right, and continuing on through to the fascinating locations and memorable music, we totally applaud the rough and tumble style in which this movie was “executed” (no pun intended). Serdar Gokhan has a lot of screen presence, almost like a Turkish Maurizio Merli. Let’s not forget this was the mustache-and-bellbottoms era, and there are some great 70’s fashions on display, including some ties so wide they seem to be bending the laws of physics. The film also features more things we love, such as the club/disco scene (at Club Love Story), and the time-honored Middle-Aged Punks. In this case, to prove the point that crime is rampant, they graduate from playing keep-away with a lady’s head of cabbage, to stealing apples off a cart, to torture, rape and murder. When they say crime is escalating, they’re not kidding. This movie as a whole may have the same blueprint as Death Wish, but Cellat features more cabbage keep-away than they were able to fit into five installments of the original series. So take that. But that ties into our final point, which is that there is so much about Turkish culture we don’t know. Never is that more evident while watching this movie than the funeral scene. We get to see their own rites and practices which are never seen by Western eyes, which only adds to the exotic and unique feel this film exudes.

We would say “they broke the mold when they made Cellat”, but in actuality the mold was pretty much set. But what they did with it is very entertaining and enjoyable, especially if you are a fan of the Death Wish series or revenge films in general.

Comeuppance Review by: Brett and Ty
Posted by Ty at 3.5.13

Since Turkey is a neighbor country i can say that i remember a time when greek videostores had a section full of Turkish made actioners, drama etc, under the obvious label "Turkish movies".

Also the whole Italian thing with movies back then, caused a boom in the region and Turkish and Greek producers started to finance actioners, crime-thrillers etc. But slowly the whole thing just faded away for various reasons. Anyway i am not an expert when it comes to Turkish made movies (i have watched only Kilink, a kind of superhero-antihero movie http://www.cinema-nocturna.com/kilink2.jpg) but i think that there is good stuff to check out from the whole region around the mediterranean sea.

As for the Death Wish clones, i can remember at least two titles in my country that were rip-offs οr inspired by it. The first one is "The Scars of Violence aka Simadia tis Vias" where a succesfull bussiness man takes the law on his hands, after his daughter is raped. The second one is Panic At The Schools (Panikos Sta Sxoleia). Based on the whole drug craze. Is about a kid who dies from O.D and his father takes revenge on the local drugdealers, Bronson Style. (in very bad Bronson style in fact).

heres the cover of "Scars of Violence" http://www.retrodb.gr/wiki/images/0/0f/Tasimadiatisvias.JPG with the greek "Tom Selleck" Nikos Galanos. Oh the horror! The Horror!

Thanks you for your mass knowledge. That is really interesting and cool about the Turkish video stores.

Will have to check out the Death Wish clones you mentioned.

Cellat is a great movie!

Totally agree! Happy you love it too.