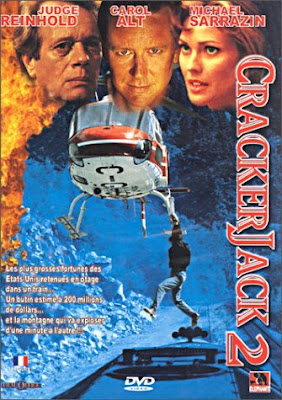 
Jack Wild is back! Why, exactly, we don’t know, but this time he’s Wilder than ever, because the ultimate action star of our time has stepped in to fill the shoes of T.I.G., who clearly headed for the hills when he had the chance - JUDGE REINHOLD. He truly is Judge, jury and executioner as the Close Talker himself shoots, blows up, stabs, snaps the necks of and expertly executes his Reinhold-Fu on the baddies! He’s not in one of those 80’s switcheroo movies this time. Reinhold is the ultimate cop on the ultimate edge, and it was clearly perfect casting for the angry and disgruntled Jack Wild.
Rather than get any name remotely associated with the action genre (and there were plenty of them around during the video store era, as we’re always talking about), it was someone’s idea - and the following words were probably said - “let’s get Judge Reinhold!” Thankfully, he accepted, and the rest is movie history. More producers should think out of the box when it comes to action casting. The Crackerjack box. Ha. But seriously, they should.

The plot concerns some sort of “financial planning train ride”, which isn’t at all a contrivance, where some of the world’s richest people are all on board. Jack Wild’s girlfriend is, naturally, the gorgeous Carol Alt. (Even though Jack is a cop, the planet’s most beautiful women can’t hold themselves back from him). She's the lead financial planner on this silly, unnecessary train voyage.
In the universe’s least-surprising plot twist, a ponytailed, typically-Eurotrash baddie named Hans Becker (Roden) (making him some sort of cross between Alan Rickman and Ted Danson as a grumpy doctor) hijacks the train and holds the passengers hostage (hence the title Hostage Train). Then the MAIN baddie, the creatively named Smith (Sarrazin) steps in, and using state of the art 90’s tech, proceeds to steal money from/torture/kill the passengers. Only ONE man - one tough, brave, macho, heroic man - can save his girlfriend and the other passengers. And jokers are WILD. 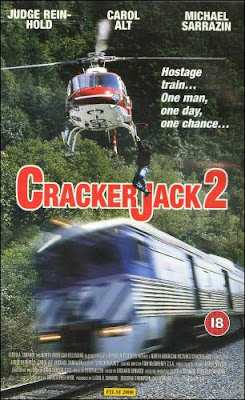 Utter silliness and weapons-grade, uncut ridiculousness ensue as Judge Reinhold fights his way through the proceedings. Every cliche is present and accounted for on the time-honored roll call, from the abandoned warehouse fights, to the sought-after Disc that contains all the information, to the token female baddie (Brozova), and so much more. The only difference this time is that our hero is Reinholding on to the bottom of the flying helicopter, instead of the standard hold.

Of course, this is the classic video store-era genre we call the “DieHardInA” movie (this time in a train tunnel), but all those other Die Hard knockoffs don’t have a pantsless Judge Reinhold casually in bed, looking on the computer, and, ickily, fighting the baddies. Pantsless. WHY? While train-based action movies can range from enjoyable, such as The Millionaire’s Express (1986), to downright awful, such as Derailed (2002), to Seagal, such as Under Siege 2 (1995), none of the aforementioned movies have the panache, the joie d’vivre if you will, of Crackerjack 2.
Even towards the end of the movie when things become more standard, Reinhold’s non-stop funny facial expressions carry the movie. From moment one, he’s constantly bugging out his eyes and screwing up his face. His muggings are truly priceless. And we laughed for a good 100 minutes. Where else will you get that? The closest analogue to this movie is Airborne (1998), where Steve Guttenberg tried to - nay - BECAME an action star. 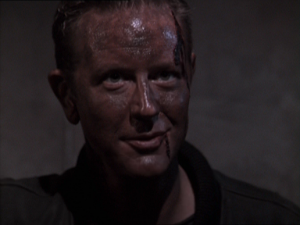 Guttenberg and Reinhold even try the same way of speaking, in a hilariously futile attempt to seem tough, i.e., speaking in a low, but gravelly tone. Add to all of this some humorously horrendous explosion effects and train/helicopter miniatures, and there you have it. The director, Robert Lee, even directed another DieHardInA movie two years before this - complete with the word “Jack” in the title, Cyberjack (1995). It’s basically the same movie, plotwise. But that one has Dudikoff. In case you weren’t paying attention, this one has Judge Reinhold. Draw your own conclusions.

Simply put, Hostage Train, or Crackerjack 2, or whatever, is the funniest comedy not labeled a comedy that you’ll find. See it soon if you want to laugh.

Also check out a killer write-up of the whole Crackerjack series by Collected Cinema!
(Thank you for the above Reinhold picture!)

Comeuppance Review by: Ty and Brett
Posted by Ty at 1.5.13

Great review Ty. Completely agree, Reinhold was hilarious in the lead. TIG must have been fuming when he heard who'd replaced him!

I'm thinking the bit where Reinhold has to fight off that assassin in his underwear in this film is definitely a nod/homage to Die Hard where McClane takes of his socks.

That sums up the film for me. They took what Die Hard had and took it to the next level!

Thanks! Would love to hear what TIG thought. That makes sense about the pantless martial arts scene. Haha. They upped the ante in this.

Ah brilliant, I need to get the sequels! Glad to hear this is a fun one.

I'm Reinholding on to my shit here. This was arguably the best review I've ever read on this site (though the one with Art Garfunkel is a personal favorite) .

So, so funny. Where can I get this?

I am laughing my ass off. Even my girlfriend laughed with the fact that Judge Reinhold is a "John McClane" Clone. The suprise was bigger when i told her that Mahoney from Police Academy made a "dia hard in a" movie, also.

p.s Didn't know that Crackejack had a sequel! I am glad i bookmarked this blog. You guys broaden my orizons.

Explosive Action: Thanks! Judge at his absolute best.

M. Brown: Haha! We are so happy you enjoyed it. Short Fuse is hilarious too...You can purchase this on Amazon on VHS under Hostage Train.

Snake Plissken: If you like this one, you will love Airborne with Steve Guttenberg. Thanks for bookmarking us. Also happy you liked They Call Me Macho Women...fun flick.

Great review! I had some trepidations about an action movie starring Reinhold, but he pulled it off better than today's Seagal. Can you imagine Seagal pantsless??? Right...he'd better stick to mumus.

Haha! Seagal pantless or shirtless would be really scary.

Die Hard On a train films are always fun, BTW, did you ever see Death Train, The Last Siege or "Death, Deceit And Destiny Aboard The Orient Express"?

Saw The Last Siege, but not the other ones. Will have to check those out.

I love how the villain in this is also named Hans. Reminds me of how Richard Norton's character in this one Dudikoff ''Die Hard'' clone "Strategic Command" is named Gruber. So original.

Haha! So true, it's like the writers thought we wouldn't notice that.

Let me begin by saying I abhor superlatives. They are all over the Internet, sports shows, etc.

I was referred here by the Skyscraper review with Anna Nicole Smith, but man, this was amazing. I had no idea this movie exists, but I shall make a valiant effort to seek it.

Keep up the amazing work!

Thanks! That really means a lot to us. Very happy you enjoyed it.

Crackerjack 2\Hostage Train is one the silliest and "greatest" action movies ever. Judge at his absolute best.