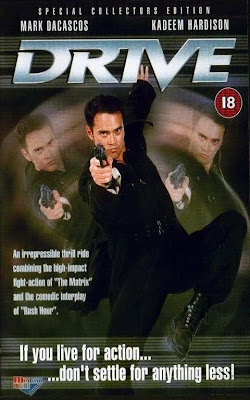 Toby Wong (Dacascos) is a man with something called a BioEngine in his chest. When it comes to his Martial Arts abilities, this prototype electronic device increases his speed and reaction time. Because it is apparently worth five million dollars, there are a lot of baddies that are after it. The leaders of the crew trying to capture Wong are Madison (Ferguson) and his sidekick Hedgehog (Walter). After a chance run-in at a bar, Wong meets aspiring songwriter Malik Brody (Hardison).

Brody recently lost his house, his wife (Lathan) and his job. So even though Wong “kidnaps” him, he no doubt feels he has nothing to lose by sticking with Wong throughout his wild adventure. Plus, Wong offers him half the money if he’ll DRIVE him from San Francisco to L.A. But the baddies are never far behind. They check into a hotel and meet a quirky girl named Deliverance (Murphy) and she helps them out for a while, but the final confrontation is at a karaoke bar, where all hell breaks loose... who will come out victorious?

It’s easy to see why Drive is widely praised for being one of the best DTV’s ever. It’s an extremely entertaining ride with excellent Martial Arts choreography, stunts, action, and plenty of humor. It never takes itself too seriously, hence bizarre inventions like the TV show “Walter The Einstein Frog” which characters seem to always be watching. Needless to say, Drive is the original Drive (2011) - didn’t the makers of that movie know there was already a movie with that title? They inadvertently showed their film ignorance. Drive is also the original Rush Hour (1998) - the comparisons are easy to see. Plus Drive is the original Crank (2006) - because the BioEngine in Wong’s chest has his adrenalin levels artificially raised and he has to deal with the consequences. 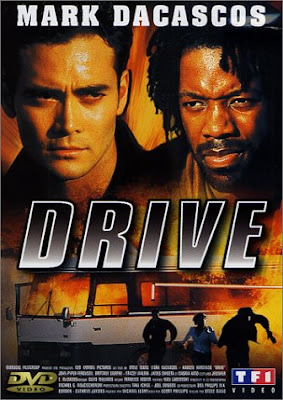 There are references to other movies as well - such as The Defiant Ones (1958), or Fled (1996), if you prefer. At one point Malik says Toby is “The original Five Fingers of Death”, and when a cop asks Toby’s name, Toby replies “Sammo Hung”. So genre fans have little winks and nods in their direction, if they’re paying attention to that sort of thing.

Hardison is genuinely funny as Malik - and as the man who gets thrown into this confusing situation, even as he pines for his lost wife - you actually feel for him as well. Compare this to the similar but much more horrible Mercenary 2 (1999). Robert Townsend is just annoying and Olivier Gruner has no personality. Whereas Dacascos executes his exaggerated moves with panache, and even sings and dances at one point! What more could you ask for?

As Toby and Mark go on the run, there’s plenty of “90’s tech” on display for nostalgia purposes. Not to mention a few songs on the soundtrack that scream “90’s!”, the most memorable of which is “Where’s the Party At” by Intellect. Mr. Intellect would probably be insulted by this, but the song is very Kris Kross-esque. But the movie is truly action packed, and delivers what you want, and more. It even avoids a couple of cliches along the way. It’s a fast-paced crowd pleaser, and we definitely recommend it.

A note about the DVD we viewed: We watched the 1 hour and 53 minute British DVD, which is the director’s cut. It restores about 15 minutes to the movie, which is substantial. Because it is in widescreen with a ton of extras, we strongly suggest you track down this DVD for the most complete “Drive” experience to date.

Also check out write-ups by our buddies, DTVC, The Unknown Movies and The Video Vacuum!

Good review, I dig this one as well. It's really an underrated gem of an action film.

We agree, Ed. Thanks for being a fellow fan of this classic.

I keep hearing about this film over and over. How have I not seen it yet?! Unless it's difficult to track down in the states here. I'll have to do some research. Great review!

It's a blast...you will definitely love it. It's easy to track down on VHS.

Thanks for the plug. This one improves on multiple viewings. And the more people you can get together to watch it the better. Great review!

No problem about the plug. This is just A-grade action...always wanted to watch it with a group.

Love this film. For me it's probably the best DTV film ever made. Can't praise it high enough.

Never noticed before but you're right. It does seem a bit of a precursor to Crank.

I recommend you try and track down Broken Fist (aka Broken Path/aka Attack of the Yakuza).

It's a lower budget film but it's got the directed by the same choreographer Koichi Sakamoto.

Check out my review
http://collectedcinema.blogspot.co.uk/2012/09/underrated-martial-arts-broken-fist-2008.html

Same here. This is one of the best DTVs ever. Nice write-up of Broken Fist. Will have to track it down.

Perhaps the last great martial arts film shot in the English language ... Before things got to CGI and quickly edited. Lots of nice long takes here and a very fun movie.

Can't agree more. CGI has unfortunately ruined all movies, action and otherwise, and it's a public disgrace that we have railed against before.

But on a happy note, we should be lucky we have films like this to treasure.