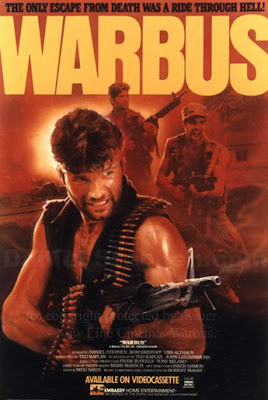 In the thick of the Vietnam war, Viet Cong killers attack some Christian Missionaries. Some U.S. Special Forces come to save them, but their only means of escape is an old school bus. Seizing the only opportunity available to flee from the enemy onslaught, they begin their trek on the bus. But it’s going to be a treacherous ride. Now faced with this not-particularly-ideal situation, will the soldiers protect the Missionaries and destroy the enemy?

Warbus is director Ferdinando Baldi’s take on the Vietnam jungle actioner replete with multiple shots of waterfalls, plenty of machine gun shooting, huts which may or may not explode, and all manner of blow-ups. But these blow-ups are notable in that they are of a high quality.

It appears most of the budget for this film went to the pyrotechnics. And if you do indeed have a limited budget to work with, that’s actually very smart, because Baldi clearly knows his audience. If you’re renting/buying or somehow viewing a movie called WARBUS, you don’t want to disappoint action buffs. On that same topic, there is minimal dialogue, but what dialogue there is has that funny dubbing we all know and love.

As far as the characters, we really don’t know who these people are, but does it really matter? The movie is a brief 79 minutes, which makes sense because it’s probably hard to do an entire feature-length movie about a Warbus. The bus in question has the words “SCHOOL BUS” proudly emblazoned all over it, and its license plate is NGH 666. So make of that what you will.

On the negative side, Warbus is a little more run-of-the-mill than it should be for a good portion of the film’s running time. The problem is this one simple idea.

The movie is like a 79 minute action SCENE, not so much a fully fleshed-out movie. Nothing sticks with you, there’s nothing to hang on to once the movie ends. Adding to that, the Mercs DVD has some tracking issues. You wouldn’t think in the age of DVD, a DVD would have tracking issues, but because it was obviously taken right from a VHS, there you go. But we’re lucky to see the movie to begin with. Let’s not look a gift bus in the mouth. Plus Warbus should get some credit for being the original Speed (1994).

Ha! I'll always remember seeing this at the local video store. Always wondered about this one. Even with it's negative points, still sounds like a decent watch compared to all the other garbage out there. Awesome one guys!

I really like this movie. It has loads of action, and is reminiscent of the many classics Cirio Santiago made. I have the US VHS, and the length of the movie is 95 minutes. It seems like they have edited out some of the plot from your version. For those who can't get enough Warbus action, good luck, because there is a sequel, starring Mark Gregory, who seems to have lost all the muscles he had in Bronx Warriors. Unfortunately, the sequel isn't as good as the first one, but it's still a solid action movie, set in Afghanistan.

Thanks for the heads up about the sequel. Will have to track it down. Haven't seen Mark Gregory in awhile!

Will totally have to buy that. What a collection!