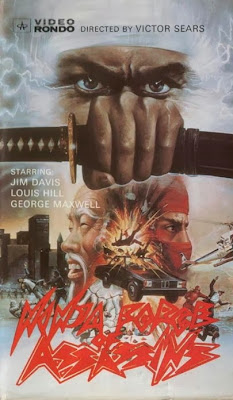 
Ninja Force of Assassins is roughly the 312th movie that Godfrey Ho directed in 1988 alone, though that figure could be off by a few hundred. Maybe we’ve seen too much of his output by this point in time, but our heads were really spinning during this particular bout of unfollowable nonsense. We don’t mean that to have negative connotations; Ho makes the concept of “nonsense” his own and truly redefines the term in his own unique way, and it’s not without its charm.

Apparently this time around, as if a plot was needed as a pretext for all the cut-and-splice ninja nuttiness, a gangster named Boss Cole is rivals with a White Ninja, meanwhile there’s an Interpol agent who may or may not be a ninja, and there’s something called a Ghost Shadow Squad and this leads to a ton of fighting interspersed with some classic dubbed dialogue. That’s the briefest and most logical way to describe what’s going on, though that may be a lost cause because you can’t apply logic to Mr. Ho’s works, it’s like trying to fit a square peg in a round hole. 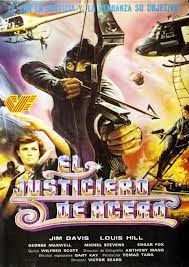 While many of the hallmarks of Ho’s filmmaking style are on display here, such as the wacky ninja action with plenty of stunts and tricks, the Final Field Fight, the stop-on-a-dime ending, the musical cues that sound suspiciously like “New York Groove”, and the fact that most of the “ninjas” consist of White guys with bizarre hair, there are some notable differences as well. Firstly, Richard Harrison is nowhere in sight, and secondly, the fight scenes, at least in some of the non-ninja brawls, seem a little grittier and more interesting than usual.

That’s the thing about Ninja Force of Assassins: it has many elements of coolness, and together with some solid action, this could have been one of Godfrey Ho’s best, if it just had more coherence. But, it remains typical Ho, with the standard mumbo-jumbo. But it does have a guy who looks like a more-ratlike version of Kevin McDonald of Kids in the Hall fame, and the time-honored Yelling While Shooting a Machine Gun. So there is fun to be had, if you’re in the right frame of mind and/or a fan of the particular Ho brand of silliness.

I've not seen this one, but you're absolutely right that there's no point watching Ho's film if you expect him to actually bother with a plot.

There's always one in a broad sense, but the detail will never make sense.

You totally just need to go with the flow, because Ho will deliver some inspired nuttiness somewhere along the line.

I think he's an incredible filmmaker. To make so many genre films, and find so many new ways to do things is an amazing feat of imagination.

Totally agree, Godfrey sure knew how to do a lot with a little. It sounds like you get what he's trying to do and a lot of people don't.

Stay tuned for more Ho Madness for the rest of the month!