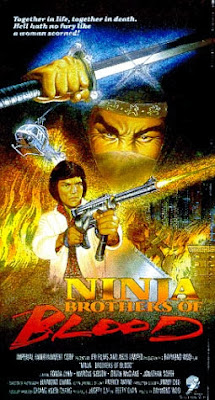 In fairly typical Godfrey Ho fashion, with Ninja Brothers of Blood, Ho takes two unrelated plotlines, keeps them running on parallel tracks, and keeps them both unrelated. In plot #1, a man named Charlie Fong, who’s “not ambitious, he just wants to get ahead!”, and who is known for his “good looks and charm”, ends up working at a desk job at one of those big factories that must be very prevalent in Hong Kong. He strikes up a relationship with pretty factory worker Fonda, and soon the two move in together. But it’s not long before these two lovebirds playing house fall victim to typical domestic spats and squabbling.

When Fonda becomes pregnant, it only exacerbates the situation, especially since Fong - and let’s not forget he’s ambitious - sets his sights on the boss’ daughter, a glamorous artist named Sophie Tao. Will it all end in tragedy, or can Charlie and Fonda patch things up? In plot #2, businessmen around a table (seemingly a Ho staple) decide to send “ninjas” (or so their headbands claim) out to do their bidding so their company can rise to the top. Or something like that, it’s basically indecipherable. But does it matter? Only you can be the judge...

With Ninja Brothers of Blood (or Ninja Knight Brothers of Blood as it is also known), we have some classic Ho silliness. If you’ve ever yearned to see what it would look like if Godfrey Ho made a domestic drama along the lines of the Molly Ringwald movie For Keeps (1988) or even a Ho take on The Graduate (1967), yearn no more.

But because we’re dealing with the Ninja Boom - that era in video store history when ninjas ruled - Ho had to splice in some unrelated ninja action. Hence the “subplot”, if you even want to call it that. So while there are plenty of scenes of Fonda and Charlie’s talky troubles, and you’re wondering, “this is Ninja Brothers of Blood?”, along comes Mike Abbott and the gang to do some sped-up fights in absurd outfits. The obvious conclusion is: there should have been much more of the Mike Abbott ninja plot, and way less of (or none of) the domestic drama plot.

While the movie has that loud, brash dubbing voiced by people that sound like they’re doing bad British accents, as if that might somehow “class up” NBOB, and it does have some entertaining synthesizer music on the soundtrack, AND Fonda does have a cool Snoopy T-shirt, the sad fact is that a good 2/3 of the movie is bereft of any action at all, be it ninja or otherwise.

So to that extent, the box art, title and so forth are somewhat misleading. We wanted to see more of the guy with curly blonde hair and stonewashed jeans doing his ninja-based thing. Our theory as to why there isn’t more of him is that we feel Ho is simply conserving footage. He’s thriftily saving what else he may have of this plot for a rainy day.  So it’s all very nonsensical, but that’s not to say bad. We remain Godfrey Ho fans, and we look forward to seeing more of his stuff. One thing you have to admit (especially based on the ending of this movie, if nothing else) - the guy’s not predictable.

As ever with Godfrey Ho, your tolerance for utter nonsense will dictate whether you feel hot or cold towards his work.

Ah, Ninja Brothers of Blood!...aka Ninja Knights Brothers of Blood...aka Official Exterminator 3: Kill for Love...aka Ninja Killer! It sure can be hard tracking down these films when they have so many alternate titles! On this film's IMDb page, half of the reviews are for a different Godfrey Ho-Mike Abbott movie.

It's all very confusing! Haha.

Mr. Ho actually bought unfinished movies, TV pilots, unsold soap operas, etc., and spliced them with some ninja footage, which is what makes the plots incomprehensible. According to imdb, he is currently teaching filmmaking, which actually goes a long way in explaining the state of filmmaking nowadays. ;-)

That's interesting he just took anything he could find. Haha. He would be the best teacher ever. We need more Ninja movies now.