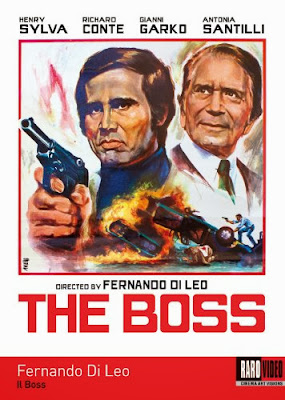 Lanzetta manages a “wipeout” of an entire mafia family...except one, a guy named Cocchi (Capponi). Cocchi is bewildered and wants revenge. Hence, they kidnap D’Aniello’s daughter Rina (Santilli). Police Commissario Torri (Garko) is trying to get to the bottom of things but he just may have his own agenda - and yet another mob boss, Don Corrasco (Conte) seems to be running things, but is he? As all these various characters intertwine, what will become of them, and how will Lanzetta navigate these confusing and treacherous waters? Find out today!

Il Boss is another winner from the amazingly talented Fernando Di Leo. Not wanting to ever repeat himself, this part of his trilogy is actually very different from the others. Not just that, it’s very different from just about any Mafia movie out there. Because not only does it have the classic high-quality Di Leo shooting and editing, but it is also extremely well-written (if perhaps a tad over-written at times). It tackles social issues such as corruption, as well as another Di Leo trademark, the youth culture of the day. Starting with another absolutely killer opening sequence, you are immediately sucked into this world and it’s very effective. 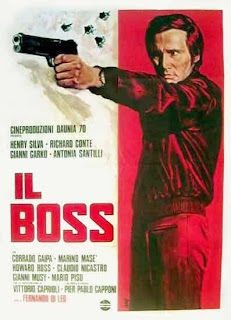 Henry Silva (or, more accurately, Lanzetta) isn’t your average hitman. Usually they use pistols with silencers so no one knows they were there. Lanzetta clearly doesn’t care, as he uses a grenade launcher! Silva with a grenade launcher should be enough to recommend this movie right there. But while the violence intermixes with the serious-minded issues at work, we felt the movie was most effective during the scenes of mob violence set to Bacalov’s amazing score. Bacalov’s score absolutely rules here. He’s a musical genius that’s made a career out of excellent scores, but he outdoes himself this time. Taking his cues from the Italian prog movement that was huge at the time, Bacalov knocks this score out of the park. It gives you that intense feeling that the movie is working on all cylinders.

Di Leo’s movies are so impactful because of a combination of technical mastery, music choices and social and psychological insights. This manifests itself especially interestingly in Il Boss with Santilli’s Rina character. So Di Leo’s movies have withstood the test of time far better than a lot of his contemporaries. That being said, this movie is kind of talky at times and is arguably the weakest of the trilogy, but it’s still a good movie that’s well worth seeing.

Plus you have to see the Raro DVD. I (Brett) originally saw this movie on the VHS release by 3 Star Home Video. The Raro DVD not only is widescreen with subtitles, I believe it’s significantly longer, at 112 minutes. The 3 Star tape obviously does not compare. There was another VHS release back in the day (also under the name Wipeout) but I’m not sure of the label. But it’s a moot point, as this DVD is the clear choice for collectors and viewers.

Il Boss is the Mafia movie done right, and it should be seen.

Comeuppance Review by: Brett and Ty
Posted by Ty at 3.3.14