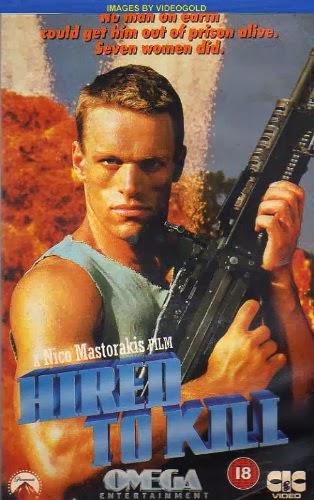 
Big thanks to frequent reader Venom for giving us a copy!

No one can say Frank Ryan (Thompson) isn’t awesome. As a badass mercenary, he plays by his own rules. But when Thomas (Kennedy) approaches the hulking brute with a new assignment, at first he’s wary. He must travel to the small country of Cypra and rescue a political prisoner named Rallis (Ferrer). But in order to do this, he must pretend to be a gay fashion designer and have a retinue of seven fashion models. Did you think there would be another way to get that job done? This initially chaps Ryan’s hide, as he’s an ultra-macho warrior who “doesn’t like working with women”. But these aren’t ordinary women, they’re all specially trained in the fighting arts.

The only real obstacle standing in their way is the president of Cypra, one Michael Bartos (Reed) and his goons. Will Ryan and his lethal ladies be able to extract the prisoner and complete their mission? Find out today…

It was nice to see fan-favorite Brian Thompson as the main hero for once. He usually plays the baddie, and he deserves a starring role like this. He gets a great intro to his character, doing something to a ringing phone that we’ve all fantasized about doing at one time or another.

But that’s about it for character development for Frank Ryan, all we need to know is that he’s a grizzled, tanktop-wearing, musclebound belligerent jackass/hero. But how could Thompson be a villain this time around, when the great Oliver Reed fills the role with aplomb? Sure, Reed’s absurd, bushy mustache makes him look like a cross between David Crosby and a walrus, but it’s all part of the fun. Hired to Kill isn’t that dissimilar from another “Oliver Reed hitting the skids” movie, Rage to Kill (1988). Maybe he demanded only to be in “…to Kill” movies to cap off his career. 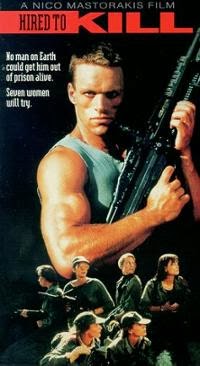 Jose Ferrer doesn’t do that much, and George Kennedy wears some cool glasses. You’ve got to hand it to director Mastorakis. He can usually corral together a bunch of B-stars like this and create a product perfect for the VHS market of the day. Kennedy also worked with Mastorakis on Nightmare at Noon (1988), as you may remember. Essentially, Hired to Kill is a non-South America-set El Presidente movie, and of course Ryan has to assemble a team, and naturally there’s a training sequence. But those time-honored classic items are filled with babes. The scenario is reminiscent of Hell Squad (1986), but just call it the “Fem-spendables”. 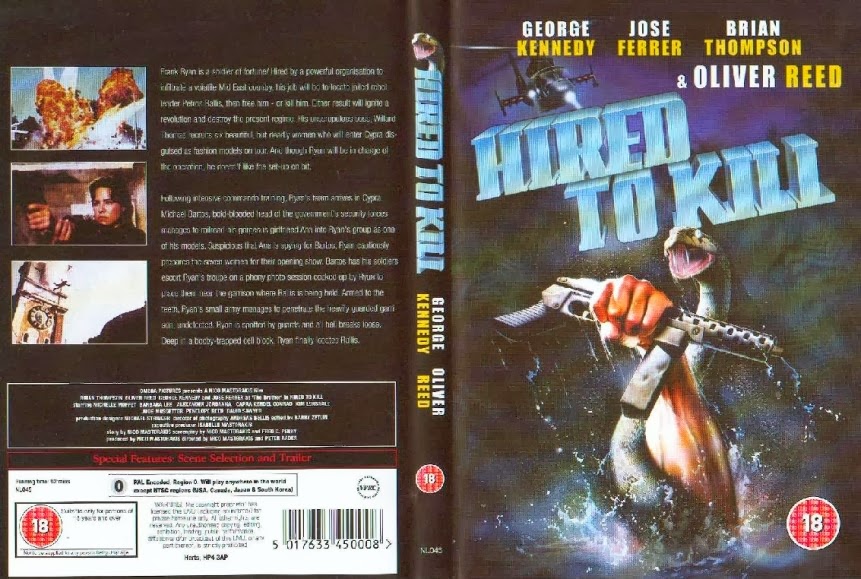 So while there are plenty of talky bits in the middle, it all comes to a nice, Red Scorpion (1988)-like climax (Thompson even resembles Dolph at times), and there is some classic un-PC dialogue. Plus he sits down while shirtlessly shooting a machine gun and wearing sunglasses. Usually it’s some maniac standing and screaming while doing that. Thompson adds some casual cool to his murderous rage.

Featuring the song “Do It For the Money” by Thomas Marolda, which is very similar to Deion Sanders’ “Must Be the Money” of a few years later (could it be that “Neon Deion” is a fan of this movie?) Hired to Kill does get a little dull at times, but the stars, especially Thompson, and the eye candy, keep it afloat.

Also check out write-ups from our buddies, The Video Vacuum and Ninja Dixon!

Yeah, this is a pretty fun flick. Definitely a step-up from Nightmare at Noon.

Thompson totally should have had more lead roles (especially tongue in cheek ones like this).

I keep waiting for him to release The Extendables (aka Action Hero) but I think it's still unavailable.

Agreed. This was fun. Oliver Reed looked ridiculous in this too. Thompson is always solid. Hope the movie comes out soon!

Yeah, really fun. The German VHS cover looks like the third here. Need some time to watch it again.

Nice! Its pretty fun and worth watching with your buddies.

When you say the end is like Red Scorpion - do you mean that there's some chopper conflagration action?

No helicopter explosion unfortunately. We wished there was one! It's similar to Red Scorp because of Thompson mowing down people in a foreign country\he looks similar to Dolph.

A really good flick. At early 90's when Mastorakis was working as head of programming for various tv stations here in Greece, he always made sure that his movies will be aired, mostly after midnight and usually after his own talk show. And speaking about his talk show...it was "trashy", had boobs and it was hilarious.

Thanks for the great info! That is really interesting that Nico ran a channel.