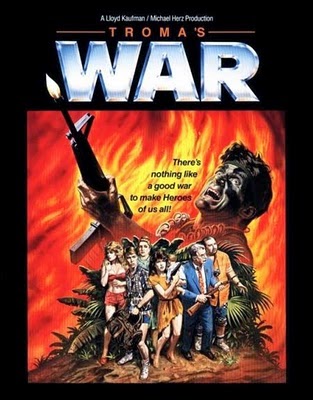 When a plane crashes on the remote island of Isla de Providencia, the survivors of the wreck find they’re in for a nasty surprise. While they were total strangers moments before the crash, now they must band together to fight battalions of terrorists using the Cuba-controlled island for training to take over the U.S.!

These communist-terrorists may have met their match when it comes to the everyday citizens aboard the plane, such as Parker (Washburn, using the name Michael Ryder), a gun expert who presumably was in Vietnam, A grandma in her 70’s, Dottie (Dublin), a blind girl, Jennifer (Petruno), and the large-and-in-charge Cooney (Romanoff), who is just one of the many unlikely heroes to emerge from this conflict. Will the baddies prevail? Will there be a conspiracy that goes all the way to the top? Will their nefarious plans be stopped by the unanticipated heroes? Find out today!

While viewers looking to satisfy their action fix might not immediately run to Troma, here they show what they can do with the genre. The 80’s action boom was so huge in video stores, clearly Troma wanted in on the action. Literally.

So Lloyd Kaufman and his team fashioned Troma’s War, which has all the gun-shooting, blow-ups, fighting, and guard tower falls as any other movie you might see, but it has that wild n’ wacky, politically incorrect humor that Troma is known for. It’s their take on the jungle slog genre, and as long as you don’t take it too seriously, you should have a good time watching it. 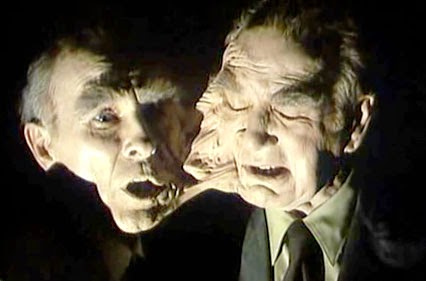 We can’t be sure if this falls into the categories of parody, satire, spoof, or if this was their sincere attempt at a guns-blazing action movie. But whatever this is, it didn’t have to be 105 minutes long. Sure, the body count is huge, and it takes a lot of time to kill that many people, but as an exercise in silliness, there surely are parts that could have been trimmed down.

But Troma’s War must have had an influence, because it’s plainly obvious that the makers of Lost ripped off a lot from this movie. Any Lost fans out there, simply watch the first few minutes of Troma’s War: you may notice some interesting similarities, such as a bunch of different personalities on a beach with a lot of plane wreckage strewn about, and a male character even needs to be sewn up by a female character. The way it looks and the way it’s shot looks very familiar. 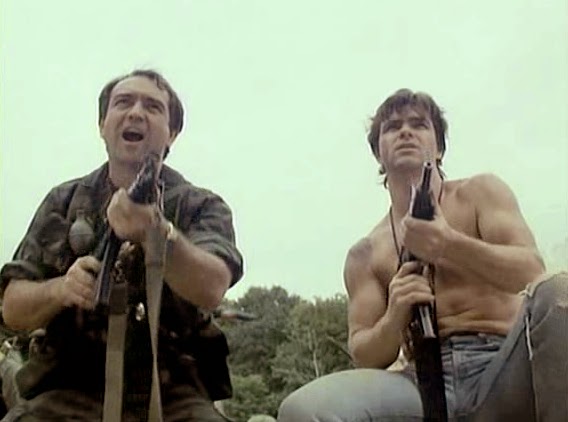 The movie truly is Rick Washburn at his absolute best, and it shows you can be a middle-aged man with thinning hair and still kill the baddies with aplomb. If you can have Middle Aged Punks, surely you can have a middle-aged hero. But that’s what the movie’s all about: people of different ages and nationalities banding together in unity to save the United States. It’s a positive message that’s not heavy-handed, and it’s certainly there beneath all the machine gun shooting and gross-out humor, if you choose to see it. If not, Troma’s War provides enough entertainment value anyway. How tongue-in-cheek it all is may be open to audience interpretation.

Featuring the songs “Alive” and “Storm is Rising” by Christopher DeMarco (which are entirely in keeping with the genre and one is even used during this movie’s version of a training sequence), Troma’s War puts a spin on the wilderness shoot-em-ups we’ve become so used to, and we welcome it.

Never heard of it. I will check it out, had fun with Troma flicks in the past.

Gregor: Thanks for the link.