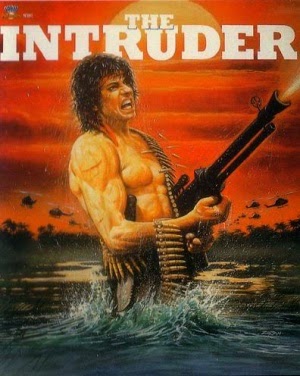 
When criminals and baddies of every kind stalk the streets of Indonesia, only one man can stop them in their tracks: Rambu (O’Brian), of course. The man his enemies call Rambu is actually an unemployed dude with a wicked fashion sense named Alex Terambuan. But to criminal mastermind John White (Gavin, who is credited as “John Smith” in the end credits) and his hordes of goons, he is an “Intruder” into their evil business. So they kidnap, rape and murder his wife Ella (Warokka, credited as “Angela” in the end credits).

At one point he even gets Rambushed by the bad guys (hence the Prerequisite Torture Sequence). Luckily Ella gave him a red scarf to remember her by before she was abducted. After he wraps it tightly around his forehead, Rambu goes out for revenge. Can anything stop a Rambu on the rampage? Find out today!

The great and mighty Peter O’Brian returns in his second film after the awesome The Stabilizer (1986) - and The Intruder has the same kind of utterly winning, infectious, nutty charm. The entertainment value of this movie is off the chart, as it delivers the goods and then some starting with the great opening scene and not really ever letting up.

The whole outing has energy (sped-up fights will do that), exotic flavor, and general insanity that viewers just have to love. Why he has a cricket ball (?) that returns to him like a boomerang is just one of the many brain-teasing questions this movie will confront you with. 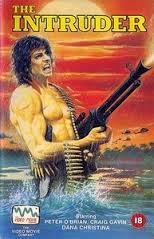 As we will learn from Rambu, only suckers don’t undo the first 4 to 5 buttons on a shirt. Actor Craig Gavin has only ever appeared in two movies in his career - and both of them were playing villains to Peter O’Brian’s heroes. Who could forget him as Greg Rainmaker in The Stabilizer? Seeing as how both movies were made in 1986, we suspect he uses the same white suit here as he did there. It’s a shame he wasn’t in more movies, he could have had a career.

But as for The Intruder in general, even the dubbing is enjoyable on its own. You could watch this movie with your eyes closed and still have a great time. But if you did that, you’d miss all the great hair, clothes, high-quality explosions, and references to a certain Stallone movie that shall remain...well, not nameless, but let’s just say one vowel different. 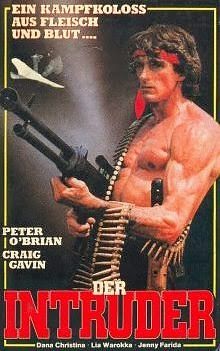 It’s always great when filmmakers are so proud of a name they came up with, they say it excessively throughout the movie. A classic example is Best of the Best 2 (1993), where the name “Brakus” is said countless times. Here, it’s the same thing, the name “Rambu” is uttered endlessly throughout the movie by just about every character. And the more they say it, the funnier it gets.

While American audiences may only know director Jopi Burnama because Troma took one of his movies and re-dubbed it into the unfunny Ferocious Female Freedom Fighters (1982), that’s a shame, because he may just have an Arizal-level of talent but no DVD distributors want to take a chance on his output. Where’s Mondo Macabro on this?

Rambu remains a sparkling gem in the rare 80’s international action canon. Don’t be afraid to draw ‘second blood’ and seek it out soon.

I have read other rave reviews for this film, so I am seriously thinking of seeking it out. But can you answer an important question for me - does it have an exploding helicopter?

Exploding Helicopter: We watched this awhile ago, but we don't remember a exploding helicopter unfortunately. Wish there was one. We always make sure to note if there is one in any movie just for you.

Cheers Ty. Exploding helicopter or not, I'm going to put this on the 'to watch' list. It sounds to entertaining not to.

I watched this not too long ago and loved every terribly dubbed, non-sensical minute of it. I can't remember if there was an exploding helicopter. Possibly not, because the budget wouldn't buy so much as a cup of coffee for the pilot.

Exploding Heli: This is a blast to watch. You'll love it.

Dave: No need for an exploding helicopter, you have Rambu!