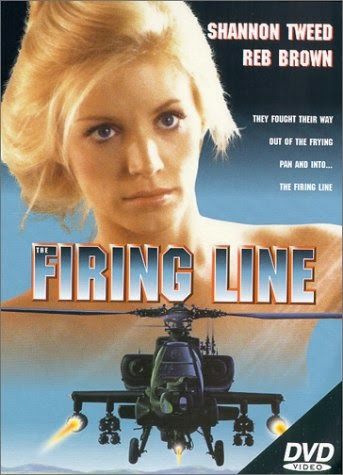 Mark Hardin (Reb) is a “military advisor”, or perhaps a commando, or perchance a mercenary, who travels to...wait for it...THE PHILIPPINES to use violence and force to tamp down a rebel insurgency against the government. After many blow-ups, explosions, bang-bangs and kabooms, he realizes the rebels have a cause worth fighting for, much like in Star Wars, and he joins up with them, bringing his considerable might and prowess with him. But that’s not all he brings along - spoiled city-dweller Sandra Spencer (Tweed) has been dragged into the fight as well. Will it be hard for Hardin to remain a hardliner to the cause...or will he and his newfound comrades be on THE FIRING LINE?

Much like how Saved By the Bell claimed in its commercials to be “too hot for prime time”, could The Firing Line be “too good for the gas station”? In the land of one dollar DVDs, the man with one eye is king. Or so we’ve been told. Realistically, though, The Firing Line is pretty much the definition of Jungle Slog. YET AGAIN we’re surrounded by leafy green Filipino foliage, guard towers fall, huts explode, many things blow up, and many machine guns fire. But where’s the love? It’s all just so standard and boring.

Rebbington Brown (we’re imagining that’s what it’s short for) holds the line (the firing line, heh heh...ugh) relatively well, even if it is a fairly subdued performance by his standards. That doesn’t stop some classic yelling/shooting that it must be in his contract to do - but he seems a little listless this time around. Sure, he has a mustache, but that’s about it.

Even the Prerequisite Torture of the hero seems a bit blah. Shannon Tweed is once again the eye candy, but little else. She plays the classic “nagging woman” we’ve seen countless times before. She doesn’t even really provide any nudity. Her excuse for being there is that she’s selling sports equipment...in a war zone. We’ve heard of war games, but this is ridiculous. 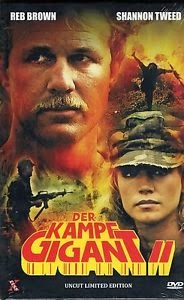 Plenty of other Philippines-shot movie mainstays are here too, including fan favorite Mike Monty, who plays a guy named Rodriguez. But thanks to the way some dialogue is said/dubbed, we thought he was called “Courageous Rodriguez”, which would have been a lot more interesting, not to mention akin to Slowpoke Rodriguez and his cousin Speedy Gonzalez. He also takes on heavy fire in military combat not in a helmet, but with a baseball cap. I’ve never seen  someone so confident they won’t be shot in the head. It’s almost like he’s bragging.

Sure, seeing Reb Brown shoot missiles from a helicopter, snap some necks, and maybe blow up a few tanks sounds great on paper, but there’s not much actual MOVIE here to surround it. And Brown is just so mellow this time around, for the most part. Helmed by longtime Philippine director Jun Gallardo (who also was responsible for the hard-to-find SFX Retaliator), the fact that there’s nil character development does kind of put a damper on things.

We’re pretty used to that approach, sadly, but we always hope the next one will rise above the rest. This one didn’t. All that being said, the fact that AIP released this in the early ‘90s proves that video stores of that era had a veritable feast of items to choose from. It doesn’t seem that many people chose this one, which makes sense.

THIS IS HILARIOUS! Your leads are incredible. The Rebbington line made me laugh out loud at work. The war games line took the cake.

How you guys can continually write creative copy to describe DTV flicks is incredible to me.

Keep up the great work!

Thanks! We really appreciate that. We got some fun movies coming up soon.

I like these women-in-action films, another one i'd recommend is Sweet Justice.

We did get to see Sweet Justice a little while ago. Review coming soon.

This movie is bad. It's the Plan 9 from outer space of Rambo rip offs. .

There's better Reb movies out there. Strike Commando or Last Flight To Hell.