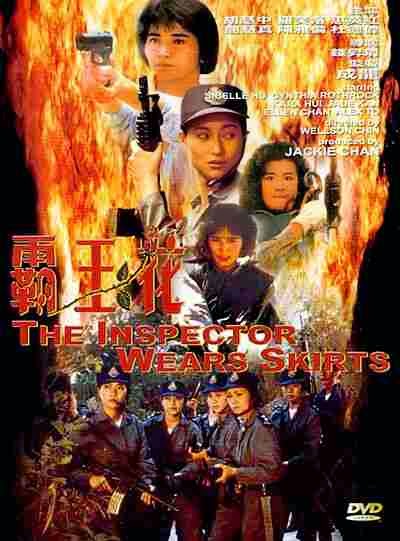 Madam Wu (Hu) is the Training Officer in charge of taking young female recruits and whipping them into fighting shape. Through constant training, the goal is to create a female commando unit that is highly capable of executing dangerous missions, with no one expecting this cadre of beauties to be such a powerful fighting force. In between climbing the monkey bars and attempting to get over walls, romance and misadventure are in the air, as an all-male unit is training nearby. Their squad is led by Mr. Kan (Stanley Fung), who naturally is attracted to the hard-to-get Madam Wu. All manner of comedic and romantic situations ensue, until the final fight.

Also Cynthia Rothrock is on hand somewhat as Madam Lo, an agent fighting the bad guys. Will our squad of spunky cadets graduate and beat the baddies, not to mention fall in love? Find out today!

The Inspector Wears Skirts opens with a bang, and also closes with one, with a bookending pair of killer fight sequences. The meat in the middle of this explosive bread mainly consists of inoffensive and silly romance/comedy. It must have been just the right formula, because the IWS series spawned three further sequels after this initial offering. While the first two films in the series are directed by Wellson Chin, there have been rumors for years that they were actually directed by Jackie Chan. While Chan did indeed produce the first two films, his level of involvement in, around or near the directors chair remains unknown.

But it makes sense that Chan was involved one way or another, because the audience-pleasing mix of action, romance and comedy is right in his wheelhouse. This should give you the feeling of the overall tenor of what’s going on here. While the movie could have used at least one more big action setpiece in the middle, the cast is hugely appealing and it kind of makes you forget about the actionless lull in the center. Rothrock’s prowess is fully on display in the scenes that she’s in, and all the other ladies get to show off as well.

And not just in the realm of Martial Arts - check out Ann Bridgewater’s amazing dance moves in the time-honored disco sequence. We would have been happy with just this, as we always watch out for the disco scene in any movie, but the movie tops itself with a show-stopping sequence in a roller rink. We won’t give anything away, but it’s hard to put into words just how much we loved this scene.

So there’s a ton of training, minimal but high-quality Rothrock, and a nice cast, but the movie could have used a strong, central villain to pull everything together. But it’s filled with that Hong Kong 80’s style we all know and love. Fans of said style should enjoy this, unless they are cynical and lame. For the rest of us, The Inspector Wears Skirts remains a fun outing.